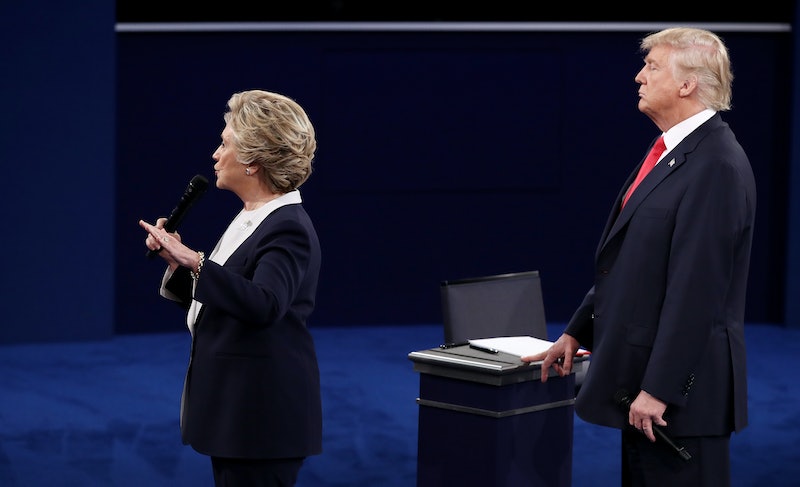 The atmosphere at the second presidential debate has been tense. Democratic candidate Hillary Clinton and Republican candidate Donald Trump focused heavily on highlighting each other's personal scandals. When questioned about the 2005 video that recently came out in which Trump made lewd comments about women and bragged about kissing and grabbing them without their consent, the Republican presidential candidate said, "I have great respect for women. Nobody has more respect for women than I do." His next gesture, though, only reminded viewers how creepy he can seem towards women. He followed up by hovering behind Clinton as she answered debate questions, and the internet was certainly entertained by it.

Trump's actions are being doubly scrutinized during Saturday's debate since, in addition to the tape that was leaked on Friday, there have been further quotes surfacing in which Trump, while speaking to radio host Howard Stern, made even more lewd comments about women with topics including "his daughter Ivanka's physique, having sex with women on their menstrual cycles, threesomes, and checking out of a relationship with women after they turn 35," according to CNN.

People on Twitter are humorously reacting to his actions, and it seems already clear that Trump is giving Saturday Night Live plenty of material for next week. Saturday Night Live parodied the event with Alec Baldwin as Trump being caught making more inappropriate comments about women on camera, and Kate McKinnon as Clinton celebrating Trump's gaffe.

Clinton may indeed be celebrating after tonight's performance.

Where is Trump Looking?

Hillary Gives Herself A Pep Talk

This Debate Has Become A Horror Story

Donald, What Are You Doing?

Even CNN Is Getting In On This

To Sum Up The Debate

This election is the gift that keeps on giving.