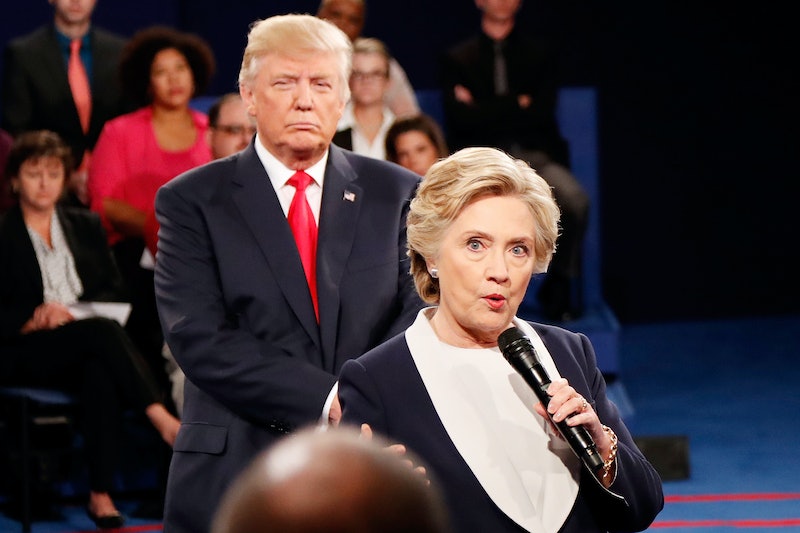 The town hall debate format gives the candidates the freedom to move around and address voters directly. But at Sunday's second presidential debate, Donald Trump seemed to have trouble getting comfortable on stage without the help of a lectern. From standing just a little too close to Hillary Clinton, to stretching awkwardly, Trump came off as unaware of his surroundings. And the internet is loving it. But while the memes keep rolling in on Twitter, Trump creepily hovering behind Clinton is honestly more scary than funny.

In the opening minutes of the debate, Trump explained away his sexually aggressive comments about women as "just words." In saying this, he showed how little he understands about the every day experiences of women. Women don't think comments about forced kissing and groping are "locker room talk." We think it's sexual assault. Hearing the words, "Grab them by the pussy. You can do anything," would illicit fear from women, not laughs, even though, as Trump says, they're "just words." And, by the way, you shouldn't need to have a wife or daughter to understand that words about sexual aggression matter. That said, Trump does have both.

And Trump's cluelessness about what bothers women extended to where he decided to stand during the debate. He has no sense of boundaries, and his behavior Sunday night proved it.

Viewers Are So Confused

What is he doing? It's a good question.

Not a bad idea.

Not Even Sure What to Call This Face

Ladies, we've all been there.

Writing His Own SNL Skit

Alec Baldwin portrayed the candidate on the last two SNL episodes, and now he's got a wealth of material to choose from for next week's show.

Can't wait to see Baldwin hover over Kate McKinnon in one week.