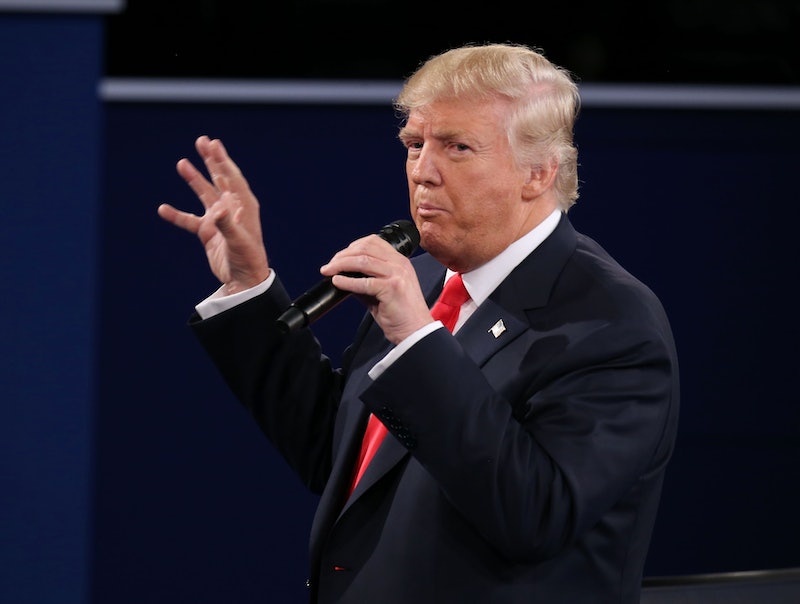 In a presidential debate like no other, Republican nominee Donald Trump took a thoughtful question from Muslim audience member Gorba Hamid regarding Islamophobia and twisted it into a disgusting show of the exact bigotry she was talking about. In doing so, Trump proved even more definitively that he has managed the art of both appealing to xenophobic bigots and revealing his own shocking ignorance about the roots of radical Islam. Trump turned a question about anti-Muslim sentiments into exactly what so many of us have come to expect from the reality TV businessman, adding to the very long laundry list of reasons why he can never become our president.

When Hamid asked a question, posed to both candidates, about how each would deal with Islamophobia, Trump initially responded by saying that Islamophobia is "a shame." However, he then proceeded to completely go off the rails and reiterate every tired trope that fuels it. Proving that an old dog can learn new tricks, Trump added a new piece to his repertoire by saying that Muslims should report each other for terrorism, citing an anecdote about the "tons" of people who saw weapons in the San Bernardino shooters' house.

The Donald may be completely off the rails, but he definitely got points for creativity on this one. While it wasn't exactly easy to parse out Trump's argument because of his signature long-winded circular reasoning, it appears that the Republican nominee blames what he dubs "radical Islamic terror" on political correctness, and on Hillary Clinton and Barack Obama for not using those exact terms enough. Maybe if they just say the term "radical Islamic terror" and then click their heels three times, it will magically go away.

While Trump has many strange debate tactics up his sleeve, this one seems fairly new — to spin a question about bigotry into a justification of that very bigotry had the potential to be a stroke of rhetorical genius were it not for the thousands of people on Twitter calling him out on the absurdity of it in real time. It likely gave Hamid, who claimed to be an undecided voter, enough information to not vote for this orange-tinted Islamophobic monster.