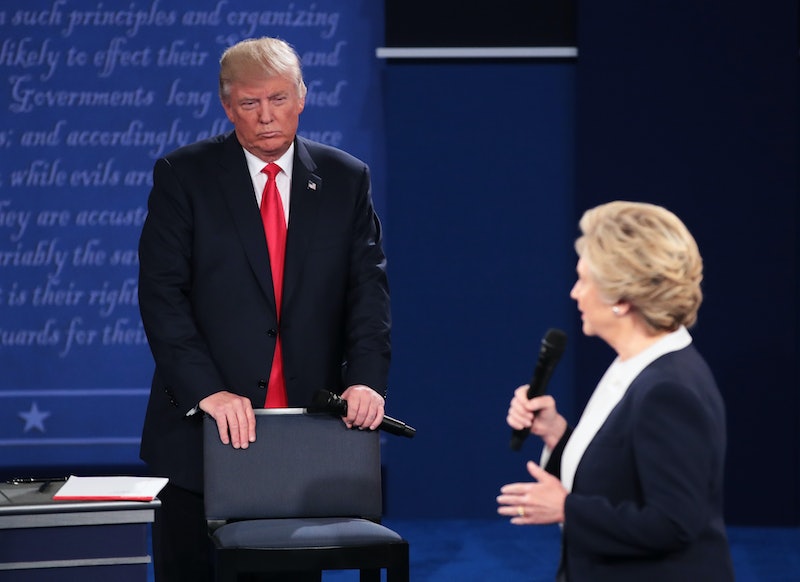 The second presidential debate was full of questionable, curious, and somewhat galling moments. One that stood out more than the others was when Republican nominee Donald Trump made the "loser" sign at Hillary Clinton — or did he?

Though his thumb and forefinger seem to indicate that Trump thinks Clinton is a loser, let's give him the benefit of the doubt for a minute. It is possible that Trump is pointing upwards with the hopes that people in the audience will move their attention from Clinton's wise and compelling words and focus on the ceiling. It's also possible that Trump is reminding viewers that no matter what happens, he's the #1 Tremendous Guy In The World.

However, let's also consider Trump's history of calling people losers. Rosie O'Donnell is a loser. People without egos are losers. Karl Rove is a loser. Graydon Carter, Mark Cuban, and Bill Maher are all losers. And there are plenty of other losers, too.

The loser title isn't just limited to people, either. The New York Daily News is a loser newspaper. Online magazine Salon is a loser (it's official name being Loser Salon). The Huffington Post is such a loser, and the only fate worse than being such a loser is being a major loser, a title inexplicably bestowed by Trump onto actor and musician Russell Brand.

All things considered, take a look at this moment from the second presidential debate and decide for yourself: Is Trump calling Clinton a loser?

Maybe. Then again, it's tough for us losers to decide.