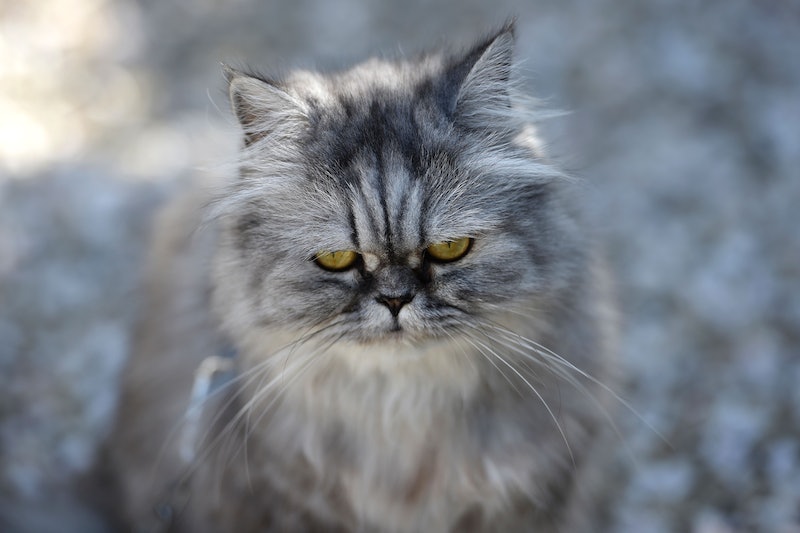 The second presidential debate was filled with many things: interruptions, arguments, dodging of questions, and more. Given the scandals, mistakes, and apologies on both sides of the isle, it's been a long election year already. Sunday's debate marked a turn for the ugly as both Donald Trump and Hillary Clinton exchanged insults and accusations. It was pretty tough to watch. Back in July, a poll revealed what many of us already felt: People are tired of the election. And it turns out, our pets feel the same way.

From the beginning of the second debate, the candidates made it clear that this was going to be a rough one when they refused to shake hands. Things only got worse as Clinton and Trump traded insults and brought up each other's scandals and past mistakes. Trump accused the moderators of being against him because he felt they weren't pressing Clinton enough about her emails and Clinton suggested that Trump was unfit to serve as president. There was bickering and not as much substance talked about because each side was defensive. Because it's been a tough run so far and you deserve it, here's some relatable pictures of pets who are just as fed up with the debate as you are.

The Cat Who Is Totally Over It

The Dog Who Is Ready For Bed

"Mom, Can We Change The Channel Yet?"

Martin O'Malley's Dog Made Clear Where His Loyalties Lie

The Bunny Who Was All "Nah"

This Pet Who Had The Right Idea

The Glare Of This Cat Speaks Directly To Your Soul

This Dog Didn't Need To Wait Until The Debate

I Don't Blame This Dog One Bit

This Dog Feels The Same Way We Do

Sometimes, a best friend says it best. If only all of us could have cute animal support as a reward for enduring that hour and a half of draining political tug of war. Luckily, we have only one more of these to get through before election day. Then we have three whole blissful debate-free years before election 2020. Unless Trump is elected. Then, we all are in for much worse than sitting through a tiring debate.