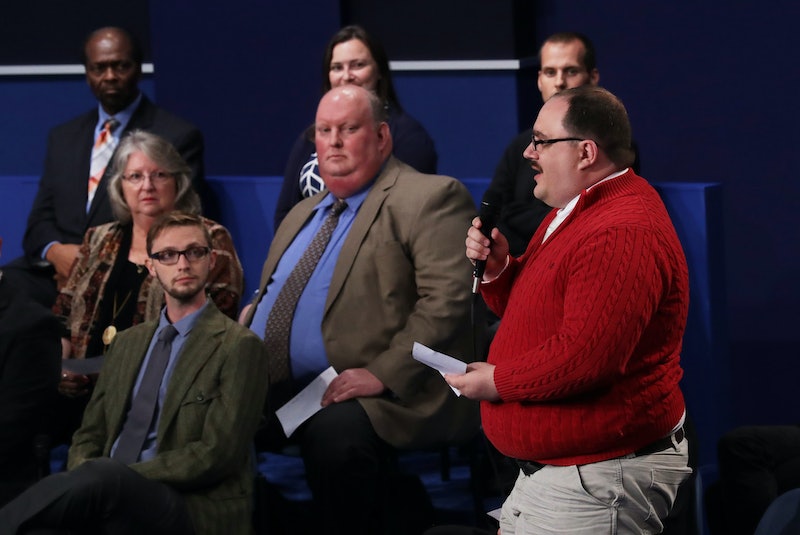 While the world watched Hillary Clinton and Donald Trump battle it out on stage at the second presidential debate, the internet turned to Ken Bone — the one man to distract them from the increasing inconceivability of this election season. Bone's style (hello, red sweater), pointed question, and all-around amazing attitude generated a surplus of memes online — as well as some fake social media accounts created in his honor.

Sunday's debate pit the two candidates against each other in an unfamiliar forum. The second debate is historically done in a town-hall format, doing away with the lecterns and the distant audience. Instead, the candidates move freely around the stage—which created a separate treasure trove of awkward Donald Trump memes. The voters present in the audience have the opportunity to ask questions to the candidates directly. And the candidates can speak face-to-face with voters they are looking to sway towards their political sides. The audience at Washington University in St. Louis was made up primarily of uncommitted voters selected by Gallup, a research and polling company.

Bone was one of the undecided voters in the crowd that was selected to ask a question. He stepped up to pose the candidates a question about their proposed energy plans, asking "what steps will your energy policy take to meet our energy needs, while at the same time remaining environmentally friendly and minimizing job layoffs?"

And with that, a star was born. Never mind that his question focused on an important policy issue. It was his red sweater and penchant for disposable cameras that the internet couldn't get enough of.

I hope the real Kenneth Bone doesn't want to get on Twitter anytime soon.

And the record for most red sweaters on one Instagram page goes to...

I think 95 precent of the internet would fully support both of these ideas.

Even Celebrities Are on Team Bone

As the protocol goes for most impromptu, inexplicable social media phenomena, first come the memes, then comes the parody Twitter account. And Bone was so loved that he had multiple Twitter and Instagram pages dedicated to him within minutes of his brief appearance on screen. This better not be the last we see of him.