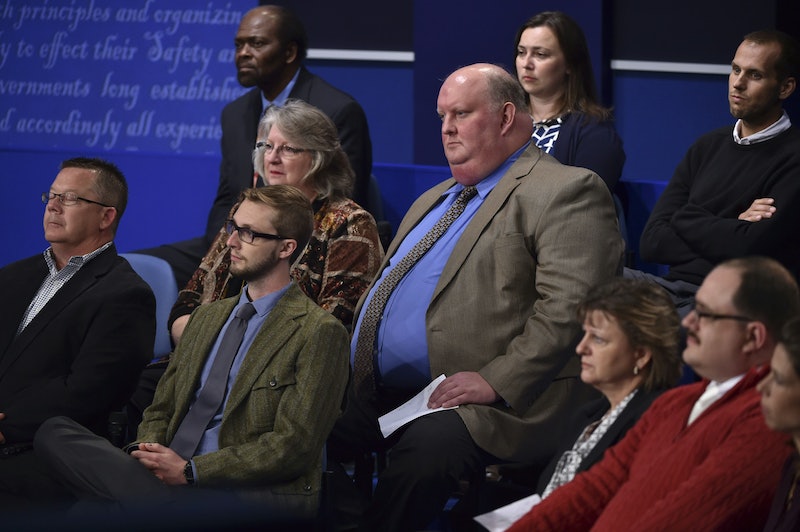 The second presidential debate went just about as expected: Donald Trump called Hillary Clinton the Devil, the candidates spent a good chunk of time discussing Trump's penchant for sexual assault, and Clinton (understandably) accused Trump of working in cahoots with Russian President Vladimir Putin. But then a hero from the audience emerged: red sweater-clad Kenneth "Ken" Bone, here to save the debate. The internet immediately — and so understandably — fell in love.

Bone was one of the undecided voters chosen to ask the candidates a question during the debate in St. Louis. "What steps will your energy policy take to meet our energy needs while at the same time remaining environmentally friendly and minimizing job loss for fossil power plant workers?" Bone asked.

Yet it wasn't his brilliant question but his sweater, glasses, and formidable mustache that drew the attention of the collective internet. According to Quartz, Bone had been tweeted about 56,400 times one hour after the debate had ended, as opposed to the estimated 21,500 tweets about Justice Scalia.

And after the weekend American politics has had, it seems like Bone appeared at the absolutely perfect time. Here's a collection of some of the greatest photos and video of the man who stole the audience's heart.

Start your Halloween off in style with this starter pack!

I'd hold on to that sweater for two decades if it were mine, too.

Maybe Clinton will sell it on her campaign store?

A pretty timely tribute, when you think about it.

The resemblance is uncanny with this one.

Maybe it was just one big cosplay?

Just your next "diddly-door" neighbor stopping by with a debate question.

A meeting of champions.

And that's the debate, folks. A special thanks to Ken Bone for making this awful week just a little less awful.