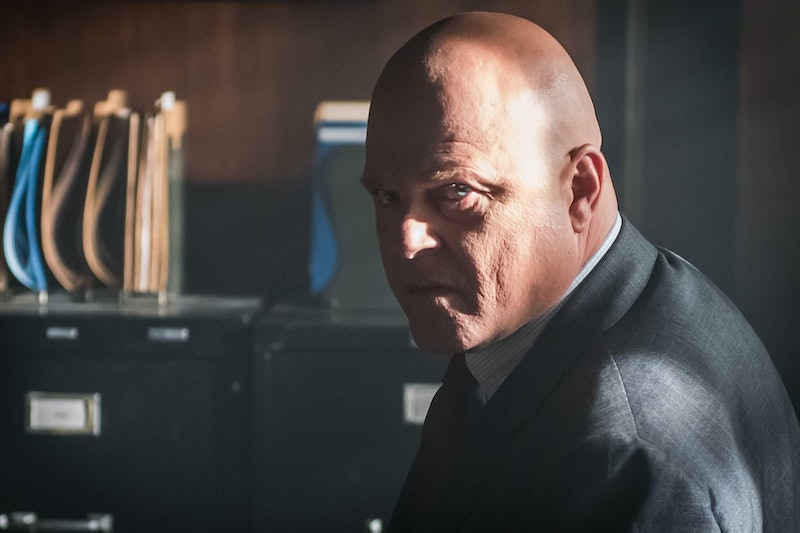 Another villain's plans changed when Jervis Tetch killed Alice on Gotham with the unlucky combination of her tripping and a badly placed pipe. If her brother hadn't been threatening her, Alice might have survived to see more episodes, but sadly, she never got the chance. Unfortunately, her death may not even save Gotham, because her blood could still cause a city-wide pandemic. As Captain Barnes stood underneath her body, among all of his fellow cops who were outfitted in hazmat suits, a drop of blood fell onto his face, and quickly, it appeared that the captain was infected by Alice's blood disease. What's going to happen to Barnes now?

Though he is not quite frothing at the mouth yet, judging by what happened to Alice's landlord, it's only a matter of time before Bullock, Jim, and newly elected mayor Penguin need to start thinking about how they're going to cure this Hugo Strange-created disease. Maybe the former Indian Hill mastermind will be making his reappearance alongside Fish Mooney soon. Fish believes that Strange is the only person who can cure her — and he might be able to figure out how to cure Captain Barnes, too. If not, it seems like the only way to stop the disease from spreading would be to set the captain on fire. That would not only be tragic, it would also mean that one of the few authorities left in Gotham who's not overtly corrupt would be dead.

When Alice fell to her death, I felt horribly for her character, who spent the majority of her life on the run from her psychotic brother, who seemingly created this whole persona of the "Mad Hatter" in a twisted way to appeal to her childhood sensibilities. One of the creepiest scenes on the show yet was the dark, abandoned carnival where Jervis was holding Alice, forcing her to role play in some kind of weird Alice in Wonderland story. But now, Alice is dead, and the Mad Hatter has escaped with at least one of his minions, who bore more than a passing resemblance to other Lewis Carroll characters, Tweedledee and Tweedledum.

It's unclear if the vials of Alice's blood are safe and secure with the GCPD or potentially still with the Mad Hatter. If it's the latter, Jervis may still be able to succeed with his plan of transforming Gotham into some kind of zombie hellscape, starting with poor Captain barnes.