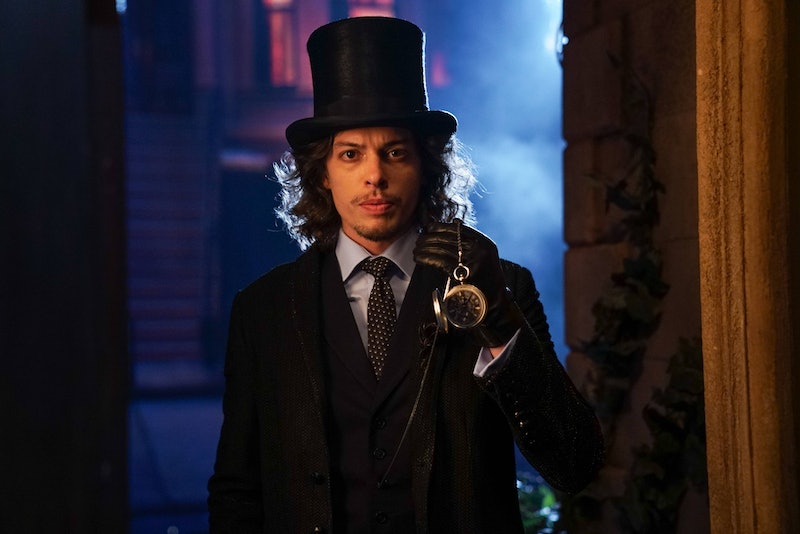 No amount of villains is a crowd for Gotham, and yet another destructive baddie is being introduced this week. Monday's episode of Gotham will feature Jervis Tetch, aka the Mad Hatter. This new villain is adding to the unsavory element in the city, but hey, if it were a nice place to live, there would never be a Batman. For this role, the show recruited Benedict Samuels, lately of The Walking Dead. As you can see from the production stills, he definitely looks the part in that Victorian headwear. But who is Jervis Tetch and why is he here? For this Gotham newcomer, family is everything.

Deadline reported that Gotham had cast Samuels as Tetch in July of this year. Along with the announcement came a character description. Tetch is apparently driven by "an unwavering desire to find his sister, Alice, a young woman who went missing in the city years ago." He's a hypnotist by profession, though where exactly he comes from and how he came to learn this technique isn't yet clear. In an interview with Zap2It, Samuels said that he believed his character would "move hell and high earth" to locate his sister. He also told the site that the sister in question does not want to be found, at least not by him. That certainly complicates things.

Like many of the criminals on Gotham, the Mad Hatter has had a long life in DC comics. The character first appeared on the pages of Batman in 1948. He's a more scientific character in print than he is in this series. He controls mind via science and technology rather than pure suggestion. Darker elements were added to the Mad Hatter's persona as the mythology developed. In some comics, it's implied that he is a pedophile, or at least that he feels a strong pull towards children. "Alice" is not his sister in that context. In the 2011 New 52 DC books, the Mad Hatter is harboring an obsession with his childhood sweetheart; of course, her given name is Alice. And when he can't possess her, he kidnaps and drugs young girls to take her place. Gotham does like to keep some secrets, and I wonder if this Mad Hatter is lying about his relationship to the girl he's pursuing.

It took three episodes of the season to get to Jervis Tetch, but according to one of the showrunners, his presence defines it, in a way. Ken Woodruff told The Hollywood Reporter that the tagline of Season 3 was changed from "Heroes Will Fall" to "Mad City" because of "the repercussions this big character was having" in regard to later episodes. "We were really intrigued with how he's not just a villain who blows stuff up," Woodruff said of the Mad Hatter. "He's a villain who can actually needle into the psyche and the emotional space of our heroes." Based on the promo for Monday's episode, the Mad Hatter is not wasting any time doing it.

Mad Hatter isn't a one-and-done kind of bad guy. Does that mean he'll stick around as long as Penguin, for example? Samuels told Zap2It in the same interview that he knows about as much about his trajectory on the show as the fans. "Nobody tells me anything," he said, but hinted that audience response could affect the length of his stay. So ready those hashtags. If you want Mad Hatter to stick around, let Fox know.