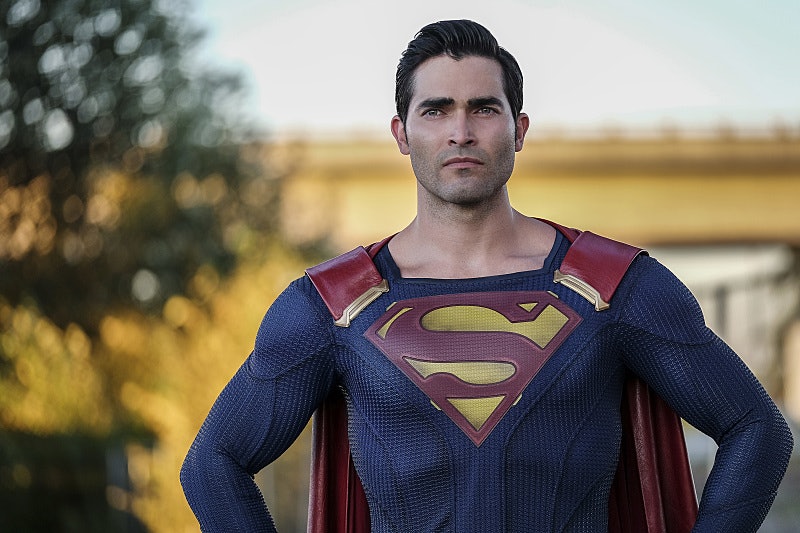 It's a bird! It's a plane! No wait, it's Superman! That's right, my friends, Supergirl may have gotten away with zero Man of Steel sightings from its freshman season, but it was only a matter of time before Kara's Kryptonian cousin made his way over to The CW series. And what better way to do that than in the Supergirl Season 2 premiere? Naturally, this also means that Clark Kent will just so happen to find himself in National City as well. (I know, what a coincidence, right?) So Kara Danvers don't be the only one juggling a double identity for the time being. But before we dive headfirst into this family reunion, you may be curious to know who is playing Superman on Supergirl .

The actor cast in the role is Tyler Hoechlin, who should look very familiar to many Teen Wolf fans. And while some viewers (myself included) were secretly hoping for Tom Welling of Smallville fame to don the red and blue cape, I can't deny that Hoechlin definitely looks the part. Plus, if the promos for his big Supergirl debut are any indication, I'm sure we're bound to fall in love with his portrayal faster than a speeding bullet. (Alright, alright, I'll stop.)

However, this won't be Hoechlin's first introduction to the small screen — far from it, actually. Like I mentioned before, the actor is known best for playing the role of Derek Hale on Teen Wolf and also portrayed a prominent character in 7th Heaven as Martin Brewer back during the show's heyday. Suffice to say, he's already got some great experience under his belt, though, Superman is certainly the most iconic figure of the bunch, so he definitely has some big shoes to fill. But I have a feeling this guy is more than up to the challenge.

But television isn't the only place you'll be finding Hoechlin as of late. In 2017, many will see him up on the silver screen in the latest Fifty Shades of Grey installment Fifty Shades Darker . His character will be Boyce Fox, who is mentioned in the books but never officially introduced. He is the first author Ana signs during his job as an editor and apparently the film will allow his character to be given a little more depth, though, we have no idea how just yet. Either way, considering how popular the erotic franchise has become, it's a pretty great get for Hoechlin and proves he isn't going away anytime soon. Nor do we want him to.

Obviously, I don't want his Supergirl appearance to detract from our leading heroine herself, so hopefully the premiere won't be completely Clark-centric. That being said, I am excited to see these two characters interact and work together for the good of all mankind. After all, two superheroes are better than one, right?