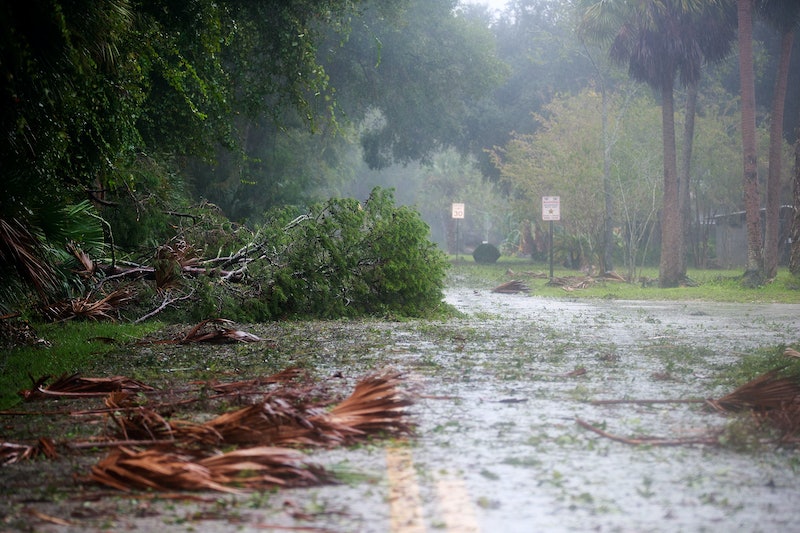 While the worst of Hurricane Matthew seems to be over, the effects of the storm will be felt for a long, long time — especially for the hundreds of victims who have had to evacuate, leaving behind their homes and belongings in order to escape. Thankfully, though, Airbnb's Disaster Response Program is helping house Hurricane Matthew victims for free. The program connects those in need with Airbnb hosts who have opened their doors to evacuees, providing safe places to stay in the affected areas, including Florida, Georgia, South Carolina, and North Carolina.

Since Oct. 8, evacuees have been able to book free nights with Airbnb hosts who have volunteered to be a part of the emergency initiative. The offering is available in South Carolina until Oct. 11, in Florida until Oct. 12, in Georgia until Oct. 13 and in North Carolina until Oct. 16, according to Airbnb spokesman Nick Shapiro in an email statement to Bustle. "We are hopeful that Airbnb can help play a small part in making the evacuation process easier for residents and their families," Shapiro writes. "Our thoughts continue to be with everyone impacted by the storm, and we thank the dedicated government and emergency response personnel who are keeping our communities safe."

Outside of Hurricane Matthew, Airbnb has also been working with the Federal Emergency Management Agency (FEMA) and the Ready campaign, which is part of the Department of Homeland Security, to educate their hosts in hurricane-prone regions like Florida and the Gulf Coast on how to prepare for hurricanes and other disasters.

Airbnb's disaster response program was launched in 2012 after Hurricane Sandy struck. Inspired by the 1,400 Airbnb hosts who provided Sandy victims with meals and roofs over their heads in New York, Airbnb decided to create an official tool that enables Airbnb hosts around the world to help those in need during times of crisis, according to Shapiro. Since then, the program has gone international and provided relief for more than 20 disasters, including the Paris terrorist attacks, the California wildfires, and the earthquake in Ecuador, just to name a few.

Here's how it works: After a disaster strikes, Airbnb works with local emergency management officials responding to it, checking in to see whether the Airbnb Disaster Response program might help. If the officials believe it does, and Airbnb has enough hosts in the area, the tool is activated. Then, Airbnb sends out emails to recruit hosts living in those particular geographic areas. They'll add anyone who's willing and able to help on their list of free emergency accommodations, which is a great way of matching up evacuees with available hosts located nearby.

Like regular Airbnb listings, homes open to evacuees will include the usual information like amenities, safety features and house rules. The Host Guarantee, which provides $1,000,000 worth of protection for all Airbnb hosts that suffer damage to their property, is also still in effect, although it doesn't cover liabilities like jewelry, collectibles and pets.

This is just one out of several disaster relief programs available for Hurricane Matthew victims and for people who have the resources to help them. Besides humanitarian groups like the American Red Cross, it's nice to see companies like Airbnb providing their regular services at zero cost as a way to make a difference. I know this is going to sound cheesy, but it's true: It's during times like these when I see people donating their time, energy and money toward helping each other that my faith in humanity is restored.