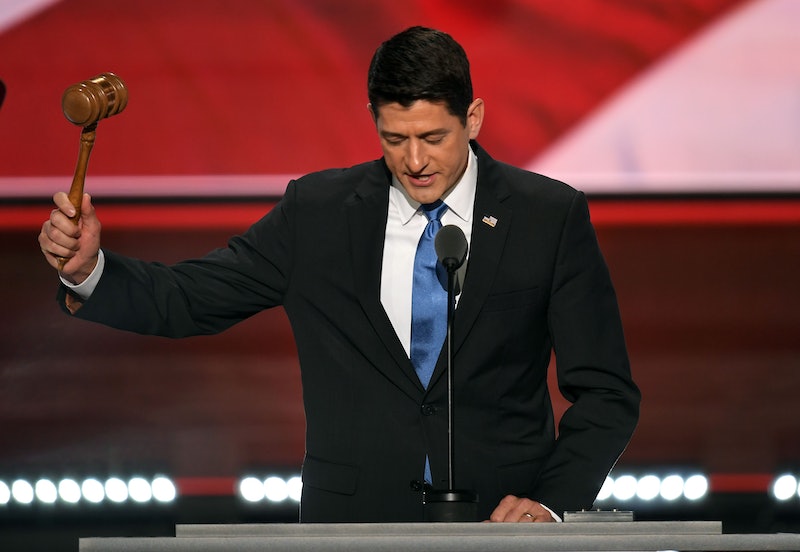 With just 29 days until the general election, The New York Times reported that House Speaker Paul Ryan will not defend Donald Trump, and will halt all planned campaign events with the Republican presidential nominee for the rest of the campaign. The congressman said he wants to instead focus his energy on keeping the Republican majority in the House. Now, Ryan is scrambling to both criticize Trump and maintain his endorsement of him (sort of).

Ryan's latest comments came after Trump's poor second debate performance on Sunday. That was just two days after the so-called "lewd comments" which Trump made while mic-ed on an Access Hollywood bus in 2005 were uncovered by The Washington Post. The House Speaker released a statement:

I am sickened by what I heard today. Women are to be championed and revered, not objectified. I hope Mr. Trump treats this situation with the seriousness it deserves and works to demonstrate to the country that he has greater respect for women than this clip suggests. In the meantime, he is no longer attending tomorrow’s event in Wisconsin.

The congressman has been reluctant to back Trump from the beginning. However, Ryan ultimately swept the litany of offensive comments spewed by the candidate throughout the campaign under the rug. This last one, though, is apparently what put Ryan over the edge, as he drew a line in the sand of sorts and excluded Trump from a Wisconsin campaign event this week and any events in the future.

Ryan is hardly the only Republican running from Trump — fast. GOP heavy hitters like New Hampshire Sen. Kelly Ayotte, Idaho Sen. Mike Crapo, Utah Rep. Jason Chaffetz, and many others have all refused to support Trump. Former Secretary of State Condoleezza Rice even went so far as to call for his resignation, saying he should drop out of the race. Not to mention how the Republican National Committee has ordered a stop on production of their "Victory Project" materials — the last-ditch campaign effort to push for Trump's election in November, according to a report in Politico.

Now, in a confusing, intellectually inconsistent play, Ryan made it clear on Monday that although he will not be by the candidate's side for the rest of the month, he's still technically endorsing him. It's a confusing, convoluted non-endorsement endorsement from Ryan which may leave voters scratching their heads — though, unfortunately, it's hardly the most mind-boggling part of this election.