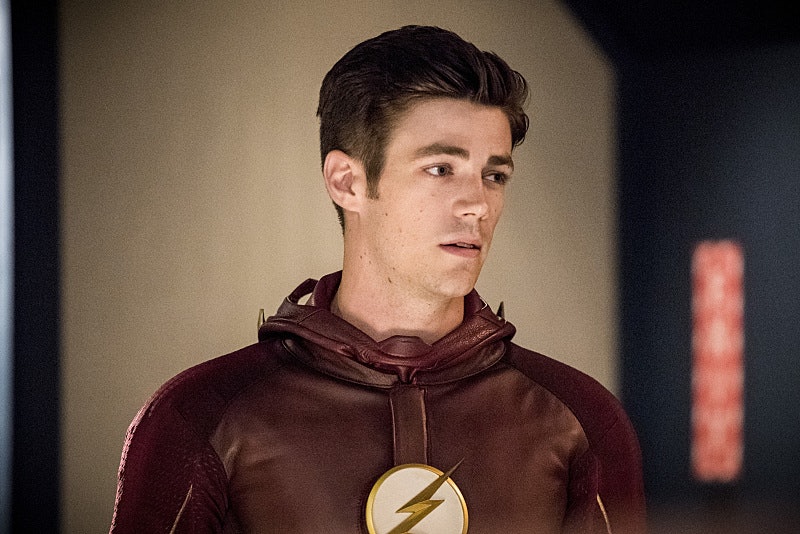 You can always count on The Flash to deliver a great cliffhanger during its weekly end credits scene and the Season 3 premiere proved to be no exception. Barry may have escaped the Flashpoint situation, but his troubles are far from over. Aside from the fact that Joe and Iris apparently don't speak in this altered, post-Flashpoint timeline, there's also a new Flash Season 3 villain looming on the horizon. Just before the credits rolled, the camera cut to a sleeping Edward Clariss, who played The Rival in "Flashpoint," being woken up from his slumber by a very creepy voice. "It’s time to wake up," the mystery voice proclaimed as the word "Alchemy" was written across a fogged up mirror. This is, of course, in reference to Doctor Alchemy, an infamous DC Comics villain who will pose a major threat to our red speedster throughout the course of this season, as executive producer Todd Helbing confirmed to TVLine.

Those of you unfamiliar with the character, Doctor Alchemy (aka Mr. Element) is a renowned chemist by the name of Albert Desmond, who suffers from a personality disorder that mirrors Two-Face in a way. One part of him is a respected forensic scientist of Central City, while the other part of him dabbles on the dark side of things. He is said to have the power to transmute one element into another via the Philosopher's Stone. (Harry Potter crossover, anyone?) He also goes on to eventually meet his identical twin whom he shares a psychic link with. So given how much The Flash likes having their actors work double-duty, we could very well end up with two Alchemy big bads by the time the season is done.

But as for how the character will infiltrate himself into the series has yet to be determined. In fact, we don't even know what the character looks like yet... or do we?

While the voice itself is played by Saw's Tobin Bell, many fans have speculated that Doctor Alchemy's identity is actually Tom Felton's character, Julian Albert. After all, he does show up in Episode 2, just a week after the notorious villain made his grand debut (kinda like what happened with Jay Garrick and Zoom last season). Not to mention Julian is also a CSI forensics expert who will serve as Barry's workplace nemesis. Coincidence? I think not.

Granted, this could all just be a red herring to throw us off who the real Doctor Alchemy will end up being. But Felton has proven to make an intriguing villain in the past, having successfully portrayed Harry Potter's Draco Malfoy for many years prior, so he would be the ideal fit for the job. Plus, having him work with a Philosopher's Stone would be an amazing nod to his HP background. It almost feels like too perfect of an opportunity to pass up.

Then again, maybe it's someone else we'll eventually be introduced to. Perhaps even Bell himself will don the role. Either way, I think it's clear that Barry's problems have only just begun and will make him yearn for the days when Zoom was his biggest problem.