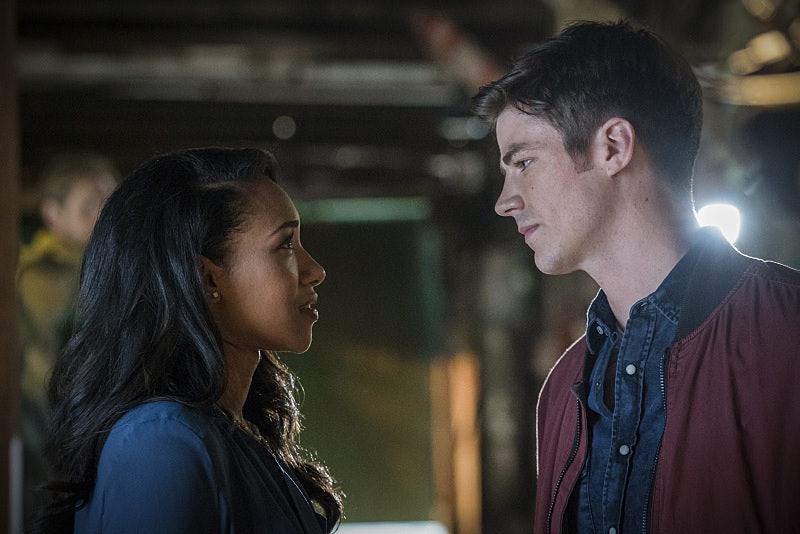 Barry might start regretting his trip to Flashpoint sooner rather than later. In the Season 3 premiere of The Flash , aptly titled "Flashpoint," Barry Allen enjoyed what his life would have been like if the Reverse Flash had never killed his mother. He watched Kid Flash, Wally West, fight criminals from the sidelines (sort of), hugged his mother every morning, and even worked up the courage to ask out a very sweet and interested Iris West. Of course, it couldn't last, but when he made a deal with Reverse Flash to return to his timeline, it wasn't really his timeline he came home to. One very important person was missing from Barry's home with Joe and Wally: Iris, causing all of us to wonder, where is Iris West in The Flash Season 3?

At the end of "Flashpoint," Reverse Flash brought Barry home and zoomed off, but not before giving him an ominous warning that this was not the home he left behind in the Season 2 finale. When Barry entered his house, he was relieved to see Wally alive and well, unlike his unconscious self in the Flashpoint timeline, and even happier to see Joe was back to being his adoptive dad and not some drunk stranger. And then, he asked where Iris was and got a stern dismissal from Joe. So, where is Iris?

It turns out, going back in time and saving his mom only to change his mind and have Reverse Flash kill her had some pretty big consequences when it comes to Iris: she's not talking to her father. Given how happy Wally and Joe were to see Barry walk through the door, it seems safe to assume that Iris might not have a great relationship with Barry right now either. Barry didn't tell Wally or Joe about his travel through time, but he might need to if he wants to figure out what's going on with Iris. In the meantime, I have some questions: where is Iris? Is she in Central City and just not close to her father? Why isn't Iris talking to Joe? Is she still close with Wally and Barry? Is Iris still on Team Flash?

The biggest question sparked by Iris' absence from The Flash isn't about The Flash or Joe, it's about Barry. Does Iris still love Barry after Flashpoint? Something tells me the answer isn't going to please WestAllen fans.

More like this
Nicola Coughlan Shared A Lady Whistledown Excerpt From ‘Bridgerton’ Season 3
By Grace Wehniainen, Alyssa Lapid and Sam Ramsden
A New 'And Just Like That' Table Read Pic Confirms A Key Character's Return
By Jack Irvin and Grace Wehniainen
The New Grey's Anatomy Interns Have Fans Feeling So Nostalgic For Season 1
By Brad Witter
'The Rings Of Power' Episode 7 Will Feature An “Unlikely Pairing Of Characters”
By Grace Wehniainen
Get Even More From Bustle — Sign Up For The Newsletter