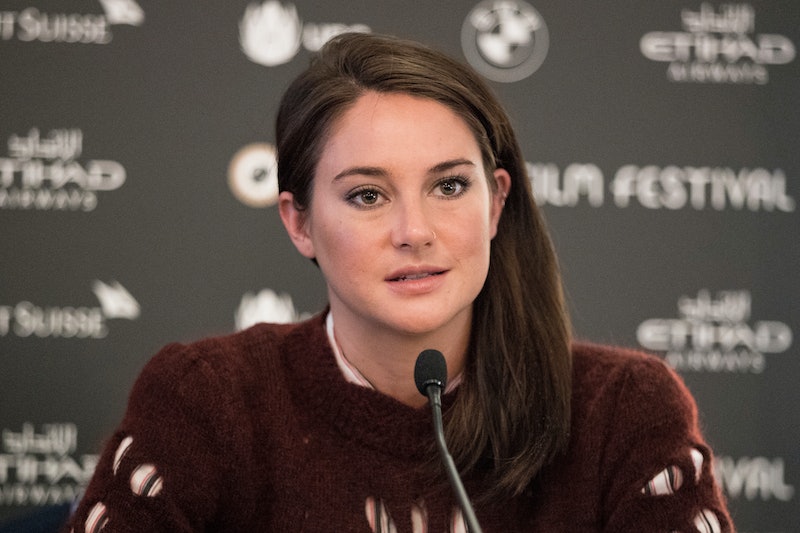 On Monday, E! News reported and confirmed with the Morton County Sheriff that actor Shailene Woodley was arrested for alleged criminal trespassing alongside 26 other individuals protesting the Dakota Access Pipeline in Sioux County, North Dakota. Bustle has reached out to both the Morton County Sheriff's office and Woodley's rep for comment, but did not receive an immediate response. Bustle also reached out to Woodley's legal rep, who says, "We do not comment on client matters." On Sunday, Woodley tweeted that she and the other protesters were on their way to the Standing Rock Sioux Tribe's reservation to help fight the controversial pipeline.

Earlier: According to NBC News, the Sioux Tribe believes the pipeline will destroy some of its sacred sites and they will continue to fight the project, despite the U.S. Court of Appeals for the District of Columbia Circuit rejecting the tribe's request to stop construction on the $3.7 billion, 1,170-mile pipeline which would transport 470,000 barrels of oil a day across four states. The pipeline would run within a half-mile of the tribe's reservation.

During the protest, Woodley shared videos on Facebook and even captured her arrest (around the 6:30 mark). "I don't know if you guys just heard me, but I was walking back to my RV, which is right there so that we can go back to camp peacefully and they grabbed me by my jacket and said that I was not allowed to continue," she claims in the one video. "And they had giant guns and batons and zip ties and they're not letting me go," she alleges. One police officer says to her in the video, "We can't talk right here, but you're going to be placed under arrest for criminal trespassing."

Woodley also inquires in the video why she is being arrested and no one else is who joined her in the protest to which the police officer says, "You were identified." Woodley also says to the officers, "As soon as you guys asked me to leave, I left." She then adds, "It's because I'm well known. It's because I have 40,000 people watching."

Before she walks away with the officers with her hands behind her back, she claims in a statement to the camera, "So everybody knows… we were going to our vehicle which they had all surrounded and waiting for me with giant guns and a giant truck behind them just so they could arrest me. I hope you're watching mainstream media."

More like this
Chris Kaba's Family Continue Fight For Justice After Viewing Police Bodycam Footage
By Sophie McEvoy
Who Is Nick Cannon Dating & How Many Kids Does He Have?
By Jordyn Tilchen and Radhika Menon
Everything To Know About Taylor Swift’s 10th Studio Album, 'Midnights'
By Grace Wehniainen and Jake Viswanath
What Is Miles Teller’s Net Worth? The 'SNL' Host's Bank Account Is No Joke
By Meg Walters
Get Even More From Bustle — Sign Up For The Newsletter