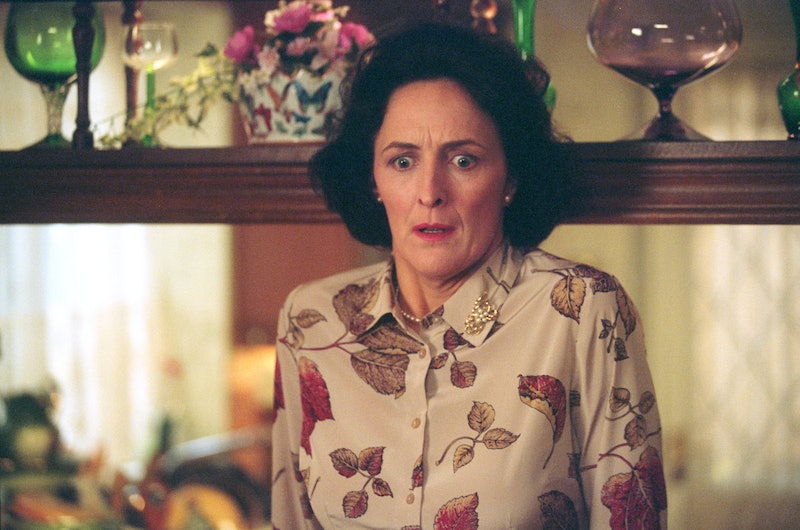 Perhaps the most frustrating character of the entire Harry Potter series is Petunia Dursley. By the end of the novels, we see the full arc of her story, from her longing to fit in, her insecurity at not being "special" like her sister, her bitterness, and her eventual obsession with being "normal" leading her to a life based entirely on shallow appearances. No, Petunia was never a nice person, but fate wasn't exactly nice to her, either — which is why this fan theory that Aunt Petunia was a witch, or at the very least had magical inclinations, makes a lot more sense than most.

The origins of this theory actually come all the way back from 2004, before the books were completed. At the Edinburgh Book Festival, a reader asked J.K. Rowling if Aunt Petunia was a Squib. Mind you, this was a remarkable thing to ask, because at this point, readers had no insight on her involvement in Lily and Snape's relationship as a child, or her desperate plea for Dumbledore to admit her to Hogwarts. Here was Rowling's reply:

Good question. No, she is not, but—[Laughter]. No, she is not a Squib. She is a Muggle, but—[Laughter]. You will have to read the other books. You might have got the impression that there is a little bit more to Aunt Petunia than meets the eye, and you will find out what it is. She is not a Squib, although that is a very good guess. Oh, I am giving a lot away here. I am being shockingly indiscreet.

But for someone who was being ~shockingly indiscreet~, there was surprisingly very little payoff in the books on this. We never learn what comes at the end of "She is a Muggle, but," or why her being a Squib was a "very good guess". Of Petunia's time before the books began, we know that she resented Lily, briefly longed to be a witch, and then eschewed magic. In adulthood, we know she barely kept in touch with Lily, as evidenced by the time she sent an ugly vase to the Potters for Christmas.

What we do get, though, is this ominous tidbit as we're saying goodbye to Aunt Petunia in the books:

Aunt Petunia, whose face had been buried in her handkerchief, looked around at the sound. She did not seem to have expected to find herself alone with Harry. Hastily stowing her wet handkerchief into her pocket, she said, ‘Well — good-bye,’ and marched toward the door without looking at him.

She stopped and looked back. For a moment Harry had the strangest feeling that she wanted to say something to him. She gave him an odd, tremulous look and seemed to teeter on the edge of speech, but then, with a little jerk of her head, she bustled out of the room after her husband and son.

What if she hadn't hesitated? What if she'd looked back and said the thing she wanted to say?

Tumblr user sulietsexual made a GIFset exploring a few scenes with Aunt Petunia, and how they might have gone differently if Rowling had revealed Petunia was a witch all along. What if, for instance, it was Petunia who inadvertently smashed Aunt Marge's glass, unable to hear the woman speak so ill of her dead sister?

But taking the theory a little further, I think that it would be feasible that Aunt Petunia wasn't a witch, but that she certainly had magical inclinations. Think of it this way — Petunia, for better or for worse, has a lot of pride. She would not have sacrificed that pride in writing that letter to Dumbledore as a kid unless she was reasonably certain that she also had some magic in her — the problem was, it just wasn't enough. And it was this, and not an all-out rejection, which led Petunia to a life of overcompensating in the normal, Muggle realm, where she wanted everything to be more than "enough". She wanted the rich husband, the stable home, for her child to have all the best in life, and to never once feel like she wasn't "enough," like she did all those years ago.

It also begins to explain how, after all these years, Petunia knows exactly what "Dementors" and "Azkaban" are, despite very little contact with her sister toward the end of her life. It's how she immediately knew that the Howler which said "Remember my last, Petunia" was meant for her before it even opened. Maybe it even explalins why she seemed so determined to punish Harry during his magical outbursts in childhood. Maybe, just maybe, more of them were Petunia's fault than the reader was initially led to believe. And what better way to cast suspicion off yourself than punish a little kid for it?

While none of this theory forgives Petunia for her awful, abusive treatment of Harry growing up, it certainly would put a lot of her behavior into perspective. And who knows? Maybe it isn't a theory after all. Maybe J.K. Rowling meant to reveal this all along. Who's going to start the aggressive Twitter campaign to find out?