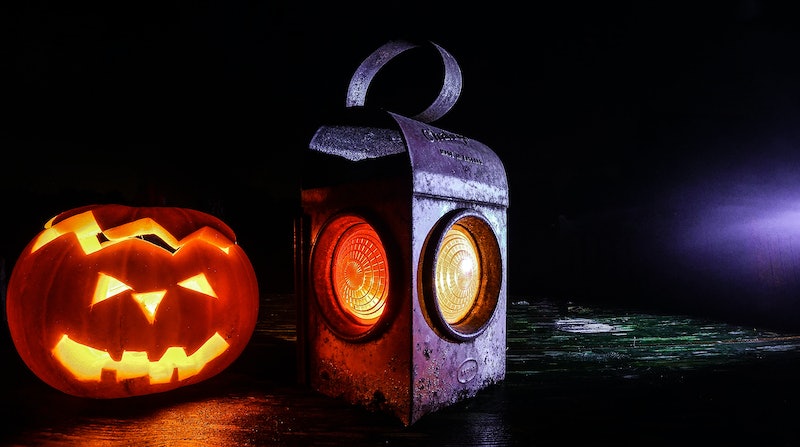 It's that time of year again — the season of all-pumpkin-everything, Pinterest-worthy costumes, and sharing a bunch of Halloween myths that aren't actually true on social media. No other holiday lends itself to urban legends quite so well as Halloween; after all, scaring your pants off is kind of the point of the whole thing. Although you might find yourself up all night for fear of the Goatman if you visit the creepy corners of the Internet before bed, the scariest stuff is usually a little more realistic; I mean, just look at the uproar over all the creepy clowns supposedly terrorizing the country this month (ugh). Bloodthirsty vampires are one thing, but the prospect of a murderous man in a tattered clown costume makes me want to nope right back into bed and never leave.

Maybe that's why there are so many myths surrounding Halloween. Of all the contemporary holidays, it deals the most explicitly with the themes of death and social disorder, so everyone is already in a weird mood. Combined with the anonymity of costumes and the fact that mischief is unofficially encouraged the night before the holiday, it's not hard to see how Halloween lends itself well to decidedly creepy urban legends: The razor blade hidden in candy, the gory Halloween decoration that turns out to be a crime scene, and so on.

So if your parents still call you every Halloween to warn you about the perils of the holiday, I have good news! Many of these legends are exactly that — legends. Here are six Halloween myths that aren't actually true.

The Myth: Somewhere out there, a would-be killer has planted poison, razor blades, or some other murder method in the Halloween candy they give to children.

The Reality: There are some stories that sound like Halloween sadism at first, but they actually turn out to be baseless. In 1964, for example, a woman in Long Island gave out dog treats and ant traps labeled "poison" as a joke to older trick-or-treaters. She was arrested and charged with child endangerment, but she told police she had passed the candy out to poke fun at teenagers who were too old for trick-or-treating.

The closest real-world incident I can find is a case from 1974, when Ronald Clark O'Bryan was convicted of lacing his son's Halloween candy with cyanide as part of a scheme to cash in on life insurance. He was convicted and sentenced to death by lethal injection; his execution occurred in 1984. However, this is still not the "sadistic stranger" of urban legend — the victim was O'Bryan's son, and Halloween appeared to be convenient rather than the inspiration for the murder.

Black Cats Are Sacrificed On Halloween

The Myth: Black cats are sacrificed by Satanic cults every Halloween.

The Reality: According to Snopes.com, a website devoted to busting urban legends, the evidence behind this myth is "inconclusive" at best. The bit about Satanic cults is almost certainly untrue; generally speaking, cults have been less of a problem than the moral panic of the '80s anticipated. Many followers of Wicca, another religion that's frequently the source of panic, actually work with cats in their practices. (That's where the image of a witch and her black cat familiar comes from.) Snopes concludes that while people may use Mischief Night and Halloween as an excuse to harm animals, it's likely to be a case of a troubled individual rather than organized rituals.

It's also worth noting that despite popular belief, black cats are actually adopted at about the same rate as other colors. Boom! Two cat myths, busted.

The Myth: This year, there's a "Sexy Harambe" costume because people are the worst.

The Reality: Despite reports that there was a "Sexy Harambe" costume, if you navigate to the costume's e-retailer page, it's actually just a "Sexy Gorilla" costume. (If you hibernated through the 2016 news cycle, Harambe was the silverback gorill killed to protect a young boy who fell into his enclosure at the Cincinnati Zoo.) Still weird, but not quite as face-palm worthy.

Full Moons Are Common On Halloween

The Myth: Halloween night is often lit by a full moon.

The Reality: It might be super atmospheric, but the chances of a full moon coinciding with Halloween are actually fairly low. According to the Chicago Weather Center, the last Halloween full moon was in 2001, and the next isn't happening until 2020.

The Myth: Somewhere out there, a haunted house exists that is so scary nobody has ever finished.

The Call From Inside The House

The Myth: A teenage girl is home alone when she receives increasingly threatening phone calls. When the police arrive, they trace the call to coming from inside the house.

The Reality: It's not quite a Halloween myth, but the legend is so common it's worth a mention. The "call coming from inside the house" trope is popular enough to appear in decades of horror movies, but it's never become reality. With the ever-rising popularity of cell phones, it probably never will — not that this helps when you're home alone at 3 a.m.