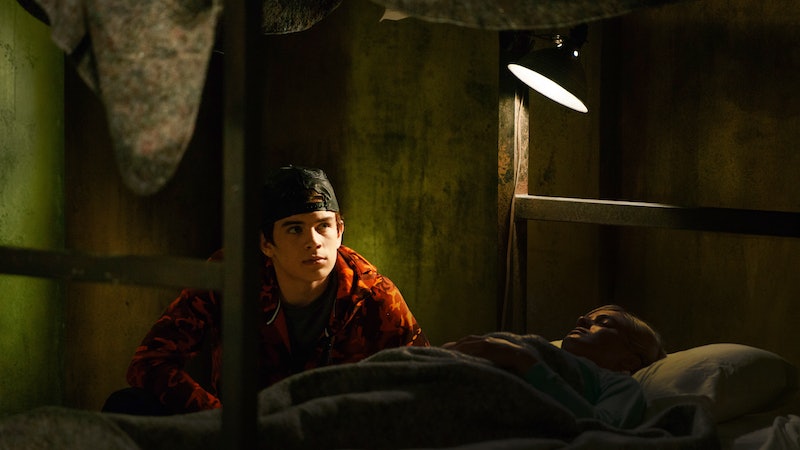 Have you ever found yourself watching old episodes of Freaks & Geeks or My So-Called Life and found yourself wondering how these high schoolers would react in the event of a zombie apocalypse? Similarly, have you ever sat through season upon season of The Walking Dead and wondered what it would be like if instead of worrying about survival and finding ammunition, they were more concerned with passing tests and staying in the popular crowd? If you answered "yes" to either of those questions, then you'll be happy to hear that Hulu's new zombie high school series Freakish has everything you're looking for.

Starring a plethora of young talent, all of Season 1 of Hulu's newest show dropped live on Oct. 10, making it the perfect pre-Halloween show to marathon. The series itself takes a patient approach to the proceedings, examining the unfortunate students and teachers stuck in school on a weekend and how they react when the town's local chemical plant suffers a massive explosion. The plot itself takes time, but, with so many characters, the show needed to give that time to developing the students that populate this post-apocalyptic school before people start getting bitten.

By the end of the first episode, there is nary a bite or even a zombie to be found — if you're expecting this show to come out guns-and-gore blazing, it may be best to stick to The Walking Dead or a more traditional horror series like American Horror Story . Instead, Freakish spends its pilot episode building the relationships between the archetypical characters. There's the shy and snarky main character, the silent and snarky main love interest, the bully, the geek, the uptight rule-follower, the jock, the cheerleader, and plenty more.

Freakish takes the approach of mashing up two already-familiar genres. Anyone studied in high-school shows may be able to guess which students are going to end up together, but will they be able to tell which ones are going to stay alive? Similarly, horror fans might be able to see the series' twists coming a mile away, but will hopefully also be interested in how those twists affect the surviving characters. The show walks both worlds well, and fans of either genre will surely find something to enjoy about the series.

The big draw of the show is that it stars some well-known internet personalities, including Vine superstar Hayes Grier. While the charm of seeing familiar faces may be lost on those who don't keep up with the rising stars of Vine and Youtube, the performances are still very capable and captivating. Freakish has all the makings of a show that can grow and maintain a devoted following and could be the first iconic high school show to debut on a streaming platform.