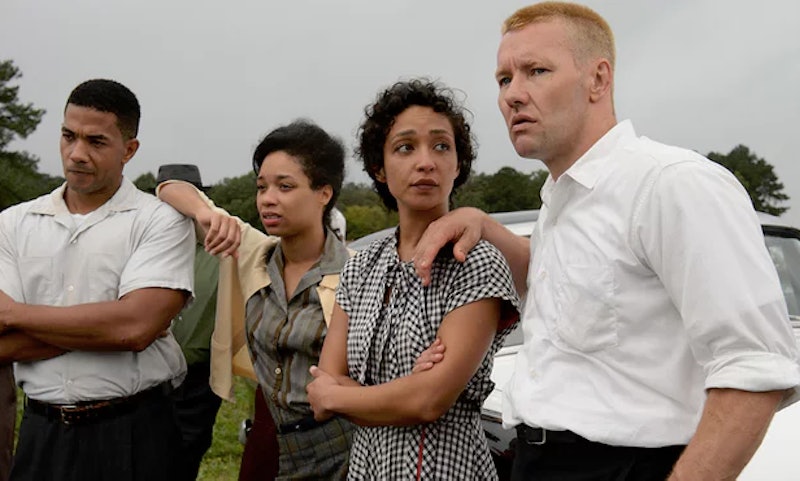 It's hard to say that now is the perfect time for Mildred and Richard Loving's story to be told on film, because everyone should already know it — Loving v. Virginia, the Supreme Court case centered around the couple that stopped the prohibition of interracial marriage across the nation happened nearly 50 years ago — but seeing as that's not the case, 2016 is a pretty damn good time to tell it. This year has featured an election that has divided the nation, and the killing of black Americans by police officers has continued, along with the Black Lives Matter movement. Jeff Nichols, the director of Loving , recognizes that the film could share a bigger message with viewers when it comes to being open-minded and seeing situations in this country, particularly those about race, as stories of fellow human beings.

"Given my history and everything else, I didn't know about this and that upset me," Nichols, who is from Little Rock, Arkansas, tells Hilton Als during the 2016 New Yorker festival at SVA Theatre. "I felt like this should be a fundamental part of our American history. It almost seems like we have a threshold somehow for Civil Rights history or something. That we've got Brown v. The Board of Education — OK, we've got that, but there's more to talk about."

The story that Nichols, who also wrote Loving, tells in the film is about love, about family, and about wanting to feel free. Of course, it also tells about their court case and the hardships they went through, which are specific to Mildred and Richard, but there are universal themes there that the Lovings put on display in their everyday lives.

"I think Richard and Mildred show us something. I think they show us how to have these debates, how to have these conversations," he says. "I think it's very convenient for us all to go to our corner and adhere to our political stances, social stances, whatever they are, and we forget about the people at the center of all of this."

The reason the phrase "say their names" was brought into the conversation when it comes to the recent police shootings was because it was too easy to sweep things under the rug or to see the police violence only as a whole, large issues, rather than as something that is happening to specific individuals, who have their own lives, loves, and families.

Nichols continues, "[Mildred and Richard's] existence bothered people. And how do you argue against your existence? You can't. All you can do is show yourself for who you are, and that's what they were doing. And if people can remember that and if they can walk out of the theater and maybe for a split second open their mind up to the idea that this thing that I'm holding a grudge against or this thing that I don't believe in for XYZ reason, which you might find validation in your own life for, maybe I can set that aside for a moment and think about the people at the center of these debates."

The film is definitely one that makes you self-reflect, and Nichols wants viewers to really feel something they might not be used to when they see it. "I found myself thinking a lot about just the psychological threat that they had to live under," he says. "And then how fascinating it is that this white man in the 1960s was living under the psychological threat that the black community has been and probably continues to live under in some places and instances. Like, what an interesting thing to try to get people to feel."

To feel that for yourself and see if the film opens your own mind, check out Loving when it hits theaters Nov. 4.