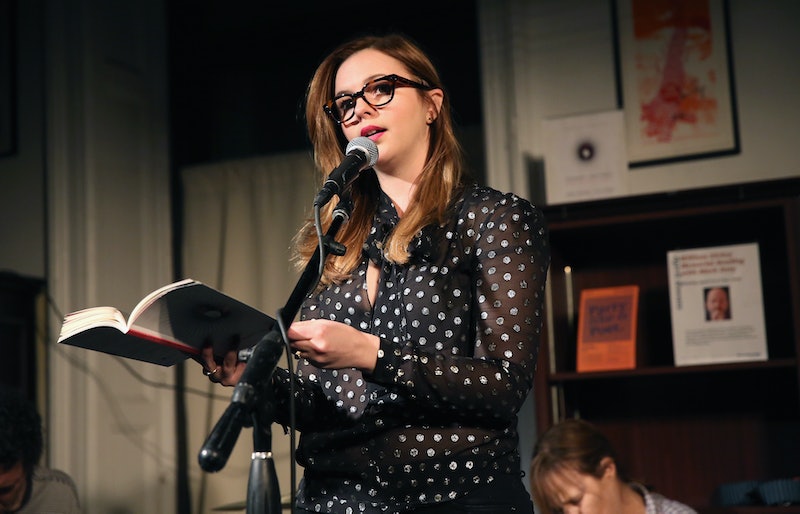 In the week since a tape of a 2005 conversation between Donald Trump and Billy Bush behind the scenes of Access Hollywood was leaked — a tape in which the two men said an array of offensive things about women in general, including Trump's comment, "I just kiss, I don't even wait. And when you're a star, they let you do it. ... Grab them by the p---y. You can do anything." — many people have come forward in response. But one particular celebrity reaction caught my eye above all the others: Amber Tamblyn, actress, author, and poet, also took to Instagram to address Trump's disgusting remarks. She did more than condemn his ways, though. She shared her own personal story of sexual assault in a powerfully detailed manner, teaching us all a very important lesson about what a tremendous, lasting impact violence has on women — and why we shouldn't feel like we have to shy away from telling the explicit truth about what dealing with sexual assault is like.

Tamblyn started her post by writing, "I need to tell you a story." From there, she told the world about being allegedly attacked one night by an ex when she was at a club with her friends in Hollywood.

"He picked me up with one hand by my hair and with his other hand, he grabbed me under my skirt by my vagina — my p---y?— and lifted me up off the floor, literally, and carried me, like something he owned, like a piece of trash, out of the club," she writes. "His fingers were practically inside of me, his other hand wrapped tightly around my hair. I screamed and kicked and cried. He carried me this way, suspended by his hands, all the way across the room."

She continues, claiming that her friends ran after her as she was being dragged outside, but to no avail; but her ex's brothers were present and were able to intervene. As they pulled him off of her, she alleges that he aggressively pulled at her clothes and tugged off her grandmother's necklace she was wearing.

Tamblyn really brings it home, though, when she writes about the aftermath of the situation. She speaks specifically about how the violence of the attack remained on her body for the next week or so.

That part of my body, which the current Presidential Nominee of the United States Donald Trump recently described as something he’d like to grab a woman by, was bruised from my ex-boyfriend's violence for at least the next week. I had a hard time wearing jeans. I couldn’t sleep without a pillow between my legs to create space.

This is where Tamblyn really had me cheering her on. Her decision to not pull back from the details made it impossible to ignore her story.

Often times, when we hear about sexual assault and rape, we're spared the gory details. We don't hear about where the violator's hands land and which parts of the body are hit and bruised. We don't hear about how much the vagina hurts after the attack is over. Even in sympathetic narratives that support the survivor completely, the actual physical horror of sexual assault often ends up getting sugarcoated. But it's the sugarcoating that can prevent us from understanding the true devastation of sexual assault. It's the sugarcoating that allows men like Trump to think that there is levity to be found in the idea of a man sexually violating a woman.

Words like "rape" and "violated" carry a certain weight to them, but they can only do so much. The media use these words to report on utterly violent acts against women, yet leave behind all the gruesome bits that really, truly uncover how catastrophic sexual assault is at the end of the day. We don't want to hear these details, as Tamblyn points out. She writes, "I am afraid my mom will read this post. I'm even more afraid that my father could ever know this story...I couldn't take that. But you understand, don't you? I needed to tell a story."

She needed to tell a detailed story, one that left vicious images imprinted in our mind, images of a broken necklace and a bruised vagina. As distressing as it likely was for her mother, her father, and all of us to picture her story, she shared it so that we could have a very small taste of what many women go through when they're brutally attacked by someone. Hopefully, we can all listen — without shying away from the gruesome particulars that live at the heart of sexual assault.