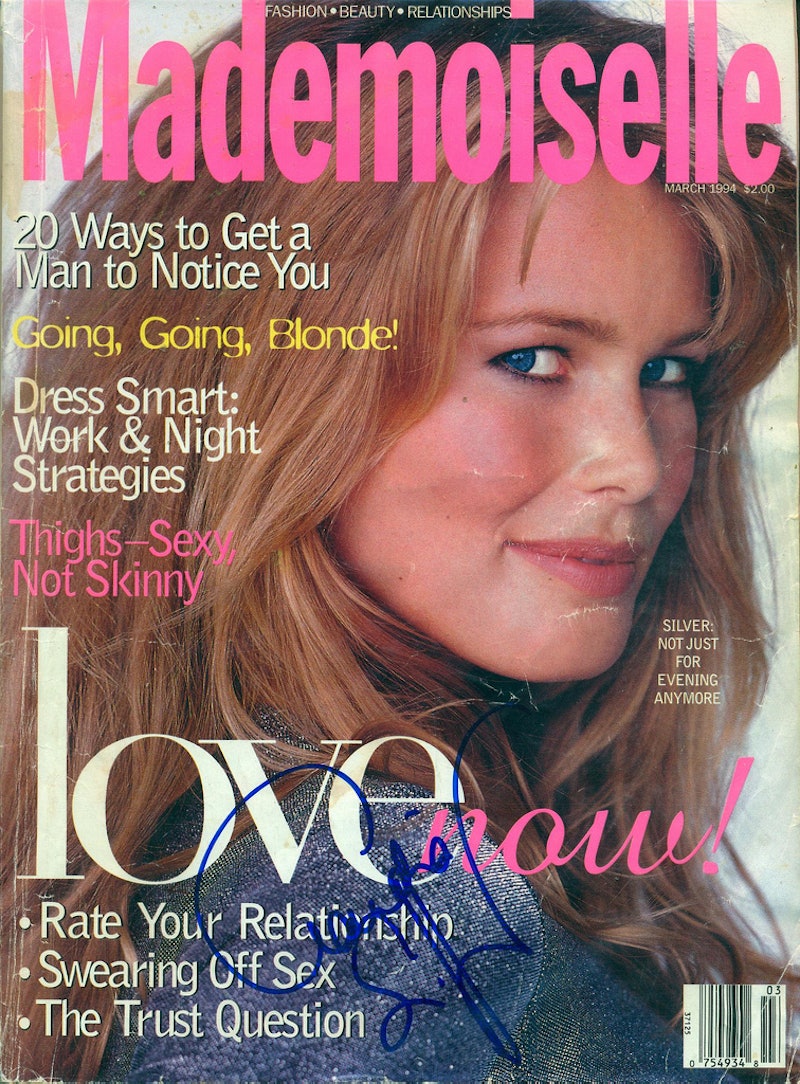 Buying fashion, beauty, and women's interest magazines was common practice during many people's teen years, but there was a lot of creepy pieces of beauty advice women found in '90s magazines , too. Strangely enough, it this was the kind of advice that seemed perfectly normal back then.

Think about it: In junior high and high school, everything about your life felt like a total mess. You had no idea what to do with your boobs, your pimples, your crush, or literally anything else. Past incarnations of women's media knew that, and often chose to capitalize on it. Magazines back then seemed only too eager to stoke the fires of insecurity. According to many mag covers in the '90s, teen girls were always after popularity, trying to slim down to half their size, and attempting to crack the code on how to make boys notice them.

1. Pit Yourself Against Other Girls

You might have won this year's science fair and gone to regionals. Maybe you got the highest score in your calculus midterm, or gave your English teacher goosebumps with your short story. But what you really need to focus on is out-prettying your competition.

Sarcasm, noted. This creepy cover reinforces the notion that women's competition is other women, and that beauty is always the ultimate goal.

2. Embrace Bullying Culture To Be Pretty

"4 out of 5 girls you hate ask for it by name," the Sun-In hair streaking ad proclaims. "Stop hating them, start being them," it helpfully suggests. In summary, the ad is telling you to alter your appearance so you can be popular.

Sure, they might have ruthlessly bullied you in the hallways or made you feel insecure about your tinted prescription glasses. But none of that matters as long as a bunch of tweens think you hit high in the "Hot or Not" list. To be fair, this is an advertisement and not advice from the staff, but the message at sends is pretty upsetting.

3. Being "Baby Soft" Turns On Boys

I'll admit there was a time or two where I'd smell my crush's borrowed hoodie in a fit of teenage love. But something about the line "Underneath it all, she's Baby Soft," has vague weird vibes, as if a dude should always be imagining you naked.

4. Keep Your Bikini Bod On Your Mind At All Times

This cover drove home the message that women and girls can't even use their part-time job money to eat a slice of pizza in peace. Instead, you had to constantly worry about how to bikini-proof yourself — never mind the fact that every body is a beach body.

5. That Rape Culture Is Sexy

The copy reads, "Apply generously to your neck so he can smell the scent as you shake your head 'no,'" encouraging the idea that you should smell good so a man will want you — and not be surprised when he makes a move without your consent. Yikes.

6. Girls Who Work Out Are Pretty

Say hello the world of non-PC culture: "Stronger is sexier; Gritty workouts for pretty girls." As if insecurities don't ride high enough during your teen years, you now get to associate being perfectly lean with being pretty. Of course, lean girls are pretty — but so are all other body types, too.

This was so close to being a body positive ad: "There's no such thing as a plain jane," and "Wishing you looked different is a major waste of time" seem like great messages. However, the ad also says, "Don't freak out over every flaw. Fix it and get on with it." Whoops, you did it again '90s magazines: There are no flaws that must be "fixed."

8. It's Important For Men To Notice You

Never mind the fact that this story was important enough to make the cover. How much do you want to bet that "20 Ways to Get a Girl to Notice You" isn't on the male equivalent of a teen magazine?

9. Blitz Diets Will Make You Beautiful

The strategy of losing five pounds in five days sounds like the root of disordered eating. Making girls think they even need to lose weight that quickly isn't just wrong, it's actually dangerous.

While some of these might have made you smile, you have to admit a good majority of them are more disturbing than not. Here's to hoping that ridiculous titles and tips like these continue to fade away to the ether, and that women's media keeps evolving into something that's fun, feminist, and totally non-competitive.

More like this
42 Black Owned Fashion & Beauty Brands To Support Today & Always
By Mekita Rivas, Shea Simmons, Kui Mwai and Dominique Norman
23 Times Meghan Markle Dressed Just Like Princess Diana
By Bustle UK
The Secret To Taylor Swift’s Fringe, According To The Experts
By Orla Pentelow
I Tried Fenty Beauty’s Viral “Poutsicle” Lip Stain — Here’s My Honest Review
By Paris Giles
Get Even More From Bustle — Sign Up For The Newsletter