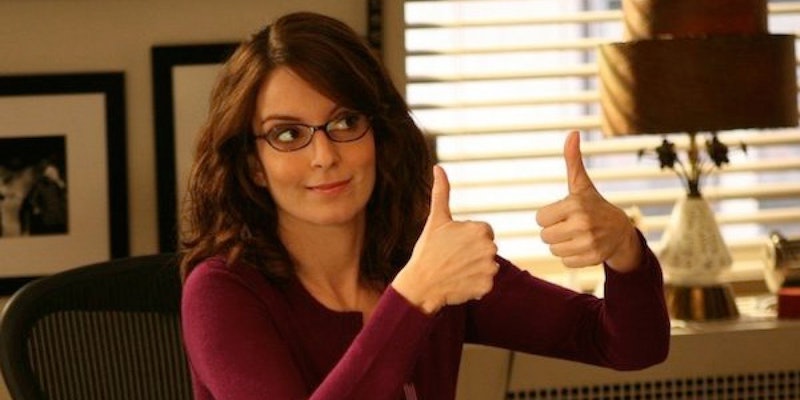 What would Liz Lemon do? It's a question many have asked themselves in the past 10 years since the 30 Rock pilot first aired. Liz Lemon was the flawed feminist we needed a decade ago, and, honestly, the one we still need today. She was a woman who was never afraid to be her sassy, confident, and neurotic self. On top of that, she always seemed to have the right thing to say in every situation — even if it felt kind of wrong. It was the right kind of wrong.

While Fey taught us that females are strong as hell with her newest show, The Unbreakable Kimmy Schmidt, as Liz she took that sentiment to the next level by living her strongest life. She showed a whole generation of women and men how to get out of jury duty (Princess Leia costumes tend to work), high-five a million angels, and work on our night cheese as often as possible. The words of Liz Lemon continue to be the most sage advice in this crazy world.

It's why in honor of 30 Rock's 10th anniversary, it's worth looking back at her best Liz-isms, the ones you can't help but repeat in your own daily life. Obviously, you want to go to there.

Seriously. Sno Balls all around for anyone who did any kind of physical activity today.

Always a good way to console someone, because really none of us should be cry.

Who needs a Valentines when you have this amazing Liz Lemon quote?

4. “Realizations are the worst.”

5. “What time do you start throwing out donuts?”

Let's agree: none of us want to see any good donuts go to waste. Ever.

6. "If reality TV has taught us anything, it's that you can't keep people with no shame down."

If only Liz was around to see The Apprentice's Donald Trump run for president, then she might have something to add to this hot take.

7. "Hey, nerds! Who's got two thumbs, speaks limited French, and hasn't cried once today? This moi."

8. “You know I can’t wear green, Jenna! The Clinique lady says I have witch undertones.”

She's got a point. Holograms really shouldn't be able to make a mockery of our court.

10. "Lizzing is a combination of laughing and whizzing."

And we're doing it right now as we read this list.

Dedicated to all those meat lover's pizza fans out there, who know that's the truest of loves.

12. “Really? I already have a drink. Do you think he’d buy me mozzarella sticks?”

Liz understands that greasy cheese-filled foods are always the way to someone's heart.

13. "You can do some serious subway flirting before you realize the guy is homeless."

Ah, January in New York. As Liz explains, bulky coats can work against you in so many ways.

15. "God, three weddings in one day, I'm going to be in Spanx for 12 hours. My elastic line is gonna get infected again."

Liz just gets it, and I really hope got some ointment for that infection.

16. "Trying on jeans is my favorite thing. Maybe later I can get a pap smear from an old male doctor."

What we're all thinking any time we have to get in that dressing room and try on a pair of jeans.

17. "Who hasn't made mistakes? I once French kissed a dog at a party to try to impress what turned out to be a very tall 12-year-old."

Liz made it clear that mistakes are nothing to be ashamed of. Even when those mistakes include kissing dogs to impress boys that are way too young for you. She'll be ready for the next time.

18. "If I could press a button and five people in the world would die, but I'd get free cable for life, I'd do it."

I appreciate her honesty and seriously hope no one ever gives her access to the nuclear codes.

19. "Do you need sex advice? Here's a tip. Sometimes a lady likes to leave her blazer on."

The more you know, courtesy of Liz Lemon.

For comparison's sake, it's kind of exactly the way Oprah feels about bread.

21. "I want to roll my eyes right now, but the doctor says that, if I keep doing it, my ocular muscles might spasm and eject my eyeballs."

A shout out to all those who have thrown so much shade in their life that their eyes just can't handle it. We salute you.

22. "Now I'm heading home for a nooner, which is what I call having pancakes for lunch."

And it's now what we call it too.

23. "You didn't realize emotion could be a weapon? Have you not read the poetry of Jewel?"

Oh, we have, Liz, so we get it. Jewel is a poetic warrior.

24. "If you're ordering me an edible arrangement to say thanks, I'd prefer a meat one."

She's a woman who knows what she wants.

25. "Why are my arms so weak? It's like I did that pushup last year for nothing!"

Give this lady a Sno Ball for all her hard work.

26. "I am a freelancer, which is pretty much a modern day cowboy."

She's just like the eighth person in the Magnificent Seven, who just doesn't get the respect she deserves because she doesn't ride a horse. She just sits in front of her computer.

Liz Lemon gets it. Netflix, baby. It's a lifestyle.

28. "Rejection from society is what created the X-Men."

Liz would definitely be a Wolverine.

29. “Are you sure? Cause I took one of those 'Which Gossip Girl are you?' quizzes, and it said I was the dad’s guitar.”

Honestly, we all want to be Blair Waldorf, but we're really all Rufus Humphrey's guitar.

30. "I also have a lot of imaginary arguments with couples on House Hunters: Why can't people look past paint color?"

Liz let me know that you can never be too invested in a show, making me feel so much better about my obsession with 30 Rock.

Ah, a woman after my own heart.

Long live Liz Lemon, whose words seem even funnier now than they did 10 years ago. They also couldn't be more true, which means it's time to grab those mozzarella sticks and snack in honor of the woman who just seems to get it.