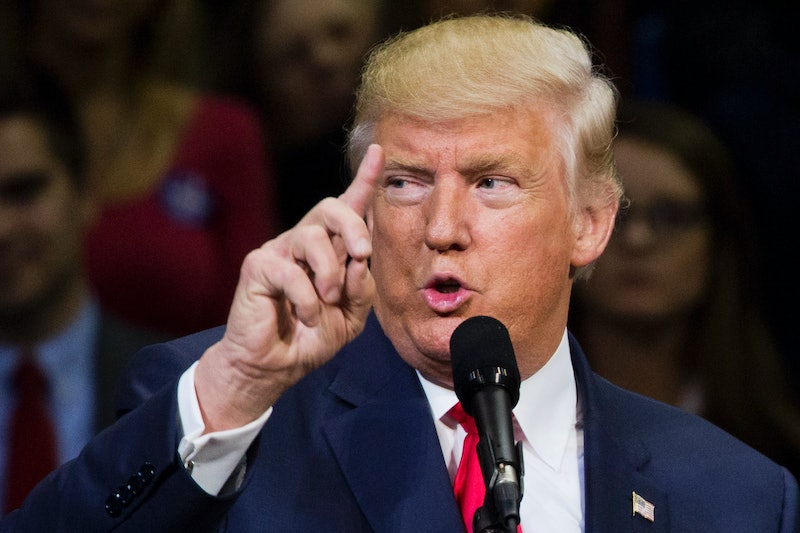 In a video ostensibly apologizing for the degrading sexual comments he made to Access Hollywood's Billy Bush about women, Donald Trump said, "I've never said I'm a perfect person, nor pretended to be someone that I'm not." But this is one of many common excuses that don't really excuse anything. The fact that Trump is imperfect was not the issue; indeed, it's precisely because people are imperfect that apologies are necessary. The fact of the matter is that grabbing someone by the genitals without their consent is inexcusable. Period.

Trump is not the only person to use a phrase like this, of course; I've heard many people who aren't public figures attempt to excuse their actions with non-apologies like "nobody's perfect" and "everybody messes up." This is a defensive way to turn a conversation around and make the person accusing you of something into the villain — something Trump is great at. It's telling, for example, that his initial response to the leaked tape stated that he apologized "if anyone was offended," rather than apologizing for saying or doing something offensive himself. Instead of owning up to wrongdoing, this tactic makes the other person seem nit-picky for supposedly expecting you to be perfect.

But nobody's expecting anyone to be perfect or not mess up. People just generally expect people to apologize when they mess up, and to make sure they don't do it again. And, of course, Trump's flaw wasn't being imperfect — it was making comments that advocate disrespect toward women. Painting all complaints as results of expecting perfection glosses over real problems.

"I Didn't Mean It That Way"

Just because somebody means well doesn't mean their actions don't hurt anyone. Through ignorance, misspeaking, or a number of other factors, actions can have positive intentions but negative outcomes. If we defend and continue our actions on the grounds that they weren't intended to hurt anyone, we will keep hurting people, when what we should be doing is adjusting our behavior to prevent hurting others again.

"I Refuse To Feel Guilty"

This is a common defensive response to the expectation that someone apologize or admit to a wrongdoing, as if the person demanding the apology just wants the other person to feel bad. It also comes up a lot in discussions of social justice, with people refusing to "feel guilty" about their privilege. First of all, nobody's asking anyone to feel guilty. Secondly, when you refuse to have a conversation because it makes you feel guilty, you're putting your comfort over the concerns of people who are oppressed. All that does is perpetuate the problem

"Everyone's Entitled To Their Opinion"

Nope, not when your opinion is sexist, racist, homophobic, or otherwise intolerant. Sure, everyone's "allowed" to say whatever hurtful things they want, but that doesn't make them less of a jerk for doing so. Freedom of speech isn't freedom from criticism, and just because you have it doesn't mean you should exercise it at other people's expense. If you say something terrible, expect to be held accountable for it.

"You Chose To Take It That Way"

There are a lot of variations on this one: "Sticks and stones can break your bones but names can't hurt you." "Nobody can make you feel inferior without your consent." "We can control our feelings." "Everything is a choice." While these sayings may be motivational for some, they're extremely invalidating when they're used to deflect blame. The logic is that if your words hurt someone else, that's their fault because they should be able to control their emotions. But whether or not someone can respond in a thick-skinned manner to your words doesn't change the fact that you've said them. Words hurt, and it shouldn't matter how sensitive the hurt person is. Sensitivity is not a bad trait. If you've hurt someone, your focus should be on helping them feel better, not debating whether they were allowed to be hurt in the first place.

So come on. No more "excuses." Let's aim to be better instead.