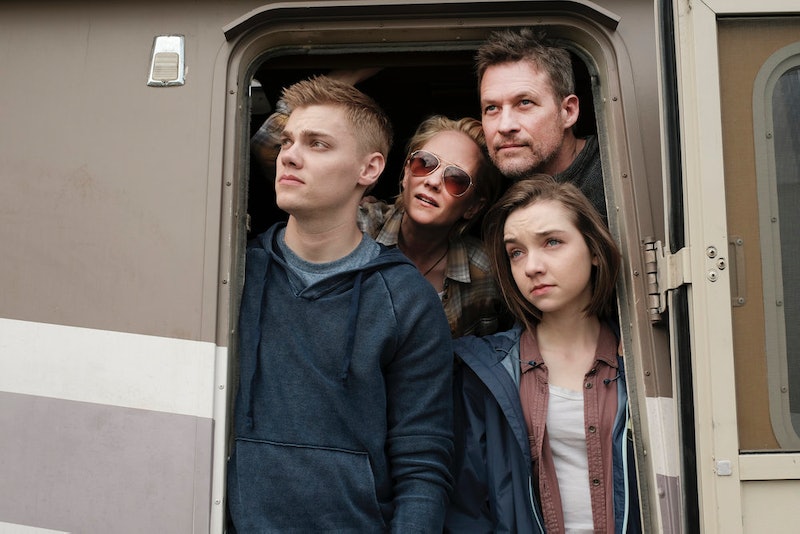 It's October, which means that the season of creepy TV shows is in full swing. The latest offering is Syfy channel's new series Channel Zero , which premieres on Oct. 11. The first installment, entitled Candle Cove, sounds exceptionally creepy. According to the official synopsis from Syfy, it will focus on a man's "obsessive recollections" of a 1980s children's TV show, Candle Cove. He becomes suspicious that the show played a role in "a series of nightmarish and deadly events from his childhood." Channel Zero 's trailer is accompanied by the line "All nightmares come from somewhere." I may be reaching, but does this indicate that elements of the series will be derived from real events, similar to American Horror Story? If so, I'd like to know if Candle Cove from Syfy's Channel Zero was a real TV show?

Channel Zero: Candle Cove was inspired by a "creepypasta," according to DreadCentral.com. This leads me to another question — "what the heck is a creepypasta?" (Channel Zero hasn't even started yet and I already have more than one mystery to solve.) Luckily, this answer is straightforward — Creepypasta.com defines it "as a short piece of horror fiction." The site launched in 2008 and it contains a whole lot of (you guessed it) seriously eerie tales. So we can rest assured that Channel Zero: Candle Cove is based on pure fiction (phew!), but what about the mysterious TV show that may or may not be deadly?

It should be fairly easy to figure out whether a TV show actually existed, right? As it turns out, even the origins of the show Candle Cove are mysterious. In 2011, Crushable.com tried to get to the bottom of it and ultimately concluded that the show didn't exist. However, a number of people seem to believe it did. In fact, when the outlet began digging, it initially appeared that the show did exist but it was not mainstream TV. Crushable.com gathered user comments from an online forum and a variety of people seemed convinced the show was real and they even provided some specific details. According to various accounts, it aired on local channels in certain areas of West Virginia, Kentucky, and Ohio in the early 1970s. The users admitted that their recollections were hazy, but they seemed certain it involved a terrifying pirate ship called Laughingstock and an evil marionette named the Skin-Taker.

Still, the urban legend about the show's existence persists. In August 2016, Blumhouse.com, a multi-media production company, resurrected the question in preparation for Channel Zero's premiere. The site used the same quotes as the Crushable.com article — and, five years later, it appears that many people maintain the series did exist. One user even claimed that he had visited his mom in a nursing home and she had confirmed the show was real and it had terrified him as a child. Then, there's this YouTube video which seemingly validates the statement that Candle Cove was real:

It has nearly 1.5 million hits on YouTube (and I predict that number will increase exponentially after Channel Zero's premiere), which highlights the power of this urban legend. So, what's the real deal? According to Blumhouse.com, the video was created by Kris Straub, the author of the Creepypasta story. And, in a somewhat humorous twist, the site states that Straub has said his work was inspired by a satirical article published by The Onion. And, there's our real explanation — a 2000 piece published by the humor site entitled "Area 36-Year-Old Still Has Occasional Lidsville Nightmare" describes a TV show with a plot that's nearly identical to what's described by those who think they remember the series:

The central villain is Hoo-Doo, an evil magician played by Reilly in horrifying makeup and facial prosthetics. Poor puppetry and cheap special effects contributed to the show's queasy, disorienting feel, as did the presence of dwarf actors inside the hat costumes.

So, there you have it — Channel Zero: Candle Cove may scare the living daylights out of us as we watch the Syfy series, but at least we can have a good laugh that Candle Cove itself never existed outside an Onion article.