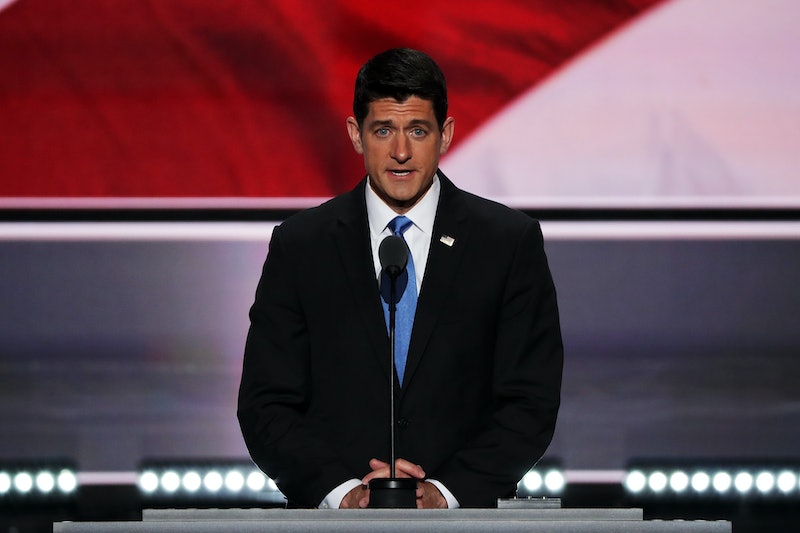 Even before a tape surfaced last Friday of Donald Trump bragging about sexual assault, his bid to become president was in dire straits. I wrote last week that Trump needed something crazy to turn things around. Now there's been something crazy, but it hasn't turned anything around. It's made things that much worse. And it's not just me (and the American people) who feels this way. The Republican Party is already planning for his loss.On Monday, in a conference call with House Republicans, Speaker of the House Paul Ryan told his fellow representatives that he would no longer defend Donald Trump, though he would still not rescind his endorsement of him. He told House Republicans to "do what's best for you in your district."

I believe Ryan is being rightfully vilified for his half-hearted rejection of Trump — denouncing his remarks, but not going as far as denouncing him, showing a lack of principle in two directions. But his behavior makes some (craven, political, self-interested) sense when you look at the impossible dilemma he's put in as a Republican leader trying to hold on to the GOP majority in the House of Representative.

Based on Trump's response to Ryan, it's clear that he's not making things any easier:

Republicans in Congress have real reason to be fearful. If several million Trump supporters decide Trump has been betrayed by Republicans in Washington, they might vote for him in November but leave their Congressional votes blank. Trump's spokesperson, Katrina Pierson, seems to be already encouraging this:

Meanwhile, GOP leaders have to worry that Republicans who reject Trump will stay home rather than voting for down-ballot candidates.

Democrats need to flip 30 House seats to win control of the chamber, and some experts have estimated that, due to the way Congressional districts have been drawn, this would require Democrats to beat Republicans by 7-10 percent in November. With Clinton currently beating Trump by six points or more in polling averages, according to Real Clear Politics (and with her up by a whopping 11 points according to an NBC / Wall Street Journal survey), this task looks far from impossible.

And if Republicans face large portions of their base who either stay home rather than vote for Trump or vote Trump but refuse to support Congressional Republicans, holding on to the House majority is moving farther from possible every day.