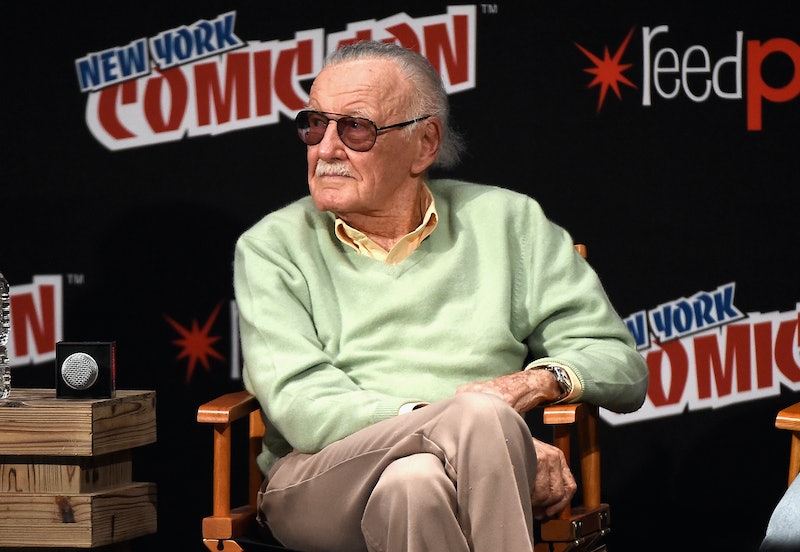 The Marvel Cinematic Universe is about to get even more magical thanks to the upcoming release of Benedict Cumberbatch's Doctor Strange. And, as always, a new film in the MCU calls for the magic of another Stan Lee cameo. But, this time around, the comic-book genius could be making his best cameo yet. On Monday, October 10, fans in select IMAX theaters got to watch an exclusive 15-minute preview of the new movie — which included Lee's Doctor Strange cameo. And, as it turns out, his appearance is just as humorous as it always is. But it was also heroic almost to the point where Lee could be a superhero himself. Let the spinoff film rumors begin.

According to ComicBook.com, Lee is seen during "one of the most epic foot chases in cinematic history." But that's not the best thing about his appearance, oh no.

Doctor Strange and Mordo are running down streets, up building sides, and across the sky as the world warps around them. After Kaecilius bends the building on which Mordo and Strange are running, they fall to the ground and into the side of a bus. As they fall, the camera angle switches to a point of view from inside the bus, revealing Stan Lee reading Aldous Huxley's The Doors of Perception. As Strange and Mordo smash into the bus' window, Lee bursts out saying, 'Now, that's hilarious!' until the camera swaps again and the chase continues.

He sounds completely unphased by what sounds like an incredibly epic scene. Amidst the chaos, Lee just sits there marveling at what may be (to him) just a regular day of supernatural events. Then again, this is Stan Lee we're talking about.

But perhaps there is more to the story than Marvel is telling us. What if Stan Lee's Doctor Strange cameo is longer than the brief clip that was already screened in theaters? It does seem a little odd to me that they would reveal his full moment so soon — unless, of course, there's more to Lee's overall story. Then again, perhaps this is wishful thinking on my part. I mean, I just think that Lee should get his very own superhero spin-off film.

When thinking about all of Lee's cameos, I can't help but feel as if he's not a part of their stories; they're a part of his. Considering all of his jobs and locations throughout the Marvel films, that would lay an amazing foundation for a spin-off, even if Lee doesn't play the character. Think of how well an everyman character spinoff did for Phil Coulson.

OK, sure, it's all a little far-fetched. However, if Marvel's listening, just know that I would watch the heck out of a Stan Lee-based superhero movie. Just throwing that thought out there.