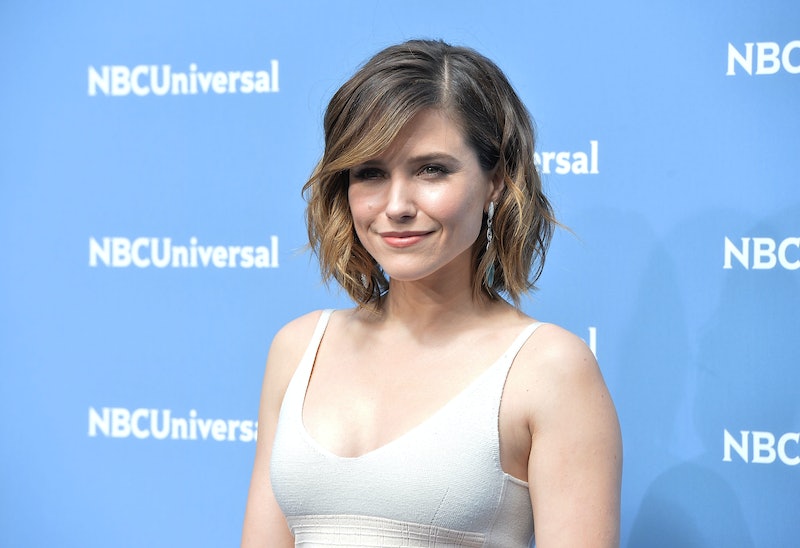 Donald Trump has proven to be a divisive candidate, whether he's calling women "fat pigs," advocating to ban all Muslims from the U.S., or labeling Mexicans as "rapists" and "criminals," just to name a few examples. And after the release of a 2005 video in which Trump brags about sexually assaulting women to former Access Hollywood host Billy Bush, his problematic mentality was only made clearer. That's why actress and activist Sophia Bush won't let voters ignore Trump and his dangerous campaign.

Because Bush thinks that everything is at stake for women in this election — "our autonomy over our bodies, our rights to have a person in office who does not brag about sexual assault" — she's been stumping for Clinton in various states to make sure voters everywhere understand how dangerous it could be for women if Trump is elected. "There is one choice and if you don't vote, or you vote for a third party, you are adding votes to that racist, misogynist thief. You are adding votes for him," Bush says.

What's been most surprising is seeing the amount of women who continued to support Trump after hearing him brag about his ability to "grab [women] by the pussy," as well as his view that he can do anything he wants to women because he's a celebrity. After the release of the 2005 video, only 13 percent of Republican women voters think Trump should end his campaign, and 45 percent of Republican voters overall think he shouldn't drop out. Bush argues that Trump's blatant sexism should absolutely not secure support from women:

This is a man who said he'd like to fuck his daughter if she weren't his child, and women aren't affected by that? It leaves me flabbergasted, truly, because I can't imagine ever supporting a person who puts women in those types of positions, and I really find it to be insane of Donald Trump to have the position he's taking on this be, 'Oh, that's who I was ten years ago.' No, it's who you are. It's who you are to women all of the time. Every woman who's encountered you, even in recent months, can say that.

Bush has a point. A poll conducted after the video was released found that 63 percent of likely voters think that Trump doesn't respect women much or at all. Yet Clinton continues to receive gendered criticism throughout the campaign, despite what Bush thinks is a clear fight for women and gender equality:

This is a woman who has a plan for education, for families, to make college free, to make sure we increase young people's opportunities to be entrepreneurial, who wants to make sure there's an increase in minimum wage so that everybody has a fair share and people don't have to work three jobs to make ends meet.

Countless Republican members called for Mike Pence to replace Trump after this video was released, as many thought that Pence was a better alternative (you know, even though they willingly elected Trump as their party's nominee). But Bush won't let that slide past voters, either:

His running mate is a man who diverted saved money for AIDS into conversion therapy for gay kids. He believes in torturing children and putting them to shock therapy and letting people with an autoimmune disease die. These two men are unfit to hold office in America and it's now or never. We either stay and fight everybody or we let guys like that stay in power.

So rather than voting for a third-party candidate, which Bush likened to "throwing an immature temper tantrum," she says people should take their voting privilege seriously, especially when Trump is one of the leading candidates. "There are two people who stand to be president of this country. He is unfit to be president. The fear campaign they have tried to wage against a woman who has been doing her damnedest to make America better and better and better is utterly mind boggling."

Although Bush thinks Trump is running a divisive and dangerous campaign, she makes it clear she wouldn't instantly write off his supporters. Instead, she says she'd sit down with them and have a conversation about why she supports Clinton ("She knows America's already great, and only wants to make it more exceptional") while listening to why someone else supports Trump. This is something many people have trouble doing, but it's an important way that Bush continues to fight for what she thinks is best for our country, while disallowing people from ignoring the danger that Trump presents to our future.

"What happens when the pendulum swings in this election, is that the pendulum is going to reverberate for decades...This is a woman who has a plan. Donald has none."