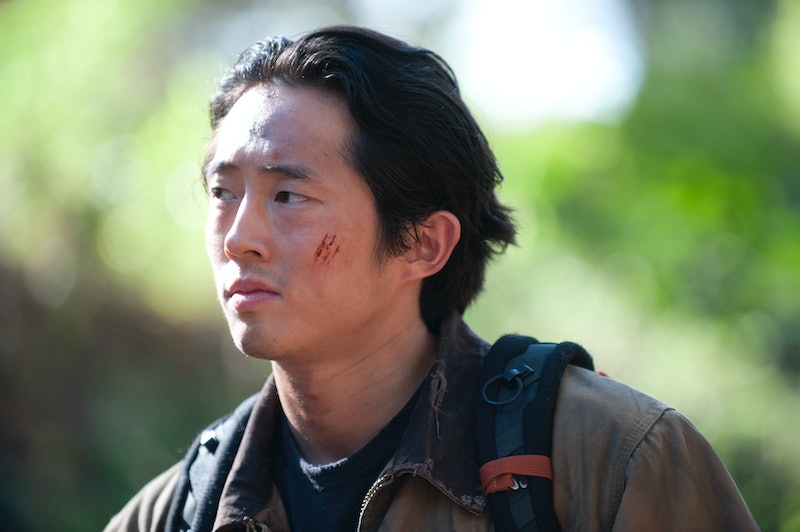 On this week’s episode of The Walking Dead, some of the gang finally make it to Terminus, safe camp where “those who arrive, survive.” By the end of the episode, Glenn and Maggie are reunited and their crews both make it to the safe camp. It looks nice enough from the outside, with plants and flowers growing and a seemingly abundant amount of supplies. The only thing that was slightly off? The lack of people roaming about. The group only encounters one person, a nice lady named Mary, but is her kindness genuine? So far, so good at Terminus, but it all seems to be a little too good to be true — but maybe it will turn out to be a nice place. (And a new setting for the show’s next season? Let's just hope it's more interesting than the dreaded farm.)Besides showing us Terminus, the episode caught up with some of the other groups and gave us some insight into a few of the newer characters.

The three weren’t a big part of the episode, but Carl and Michonne have taken to making bets and paying each other in candy bars. This little group has grown into a little family and episode even showed Rick kind of smiling(!).

Glenn’s group made it to Terminus. Glenn was also reunited with Maggie. These are probably the most long-awaited moments that came to fruition this episode, but unfortunately they weren’t awfully exciting. Terminus was scarily perfect and Maggie and Glenn just had a little mushy moment upon their reunion, but, in this group, it was really Tara and Abraham/Eugene/Rosita that were the focus.

After finding a couple of notes from Maggie, Glenn knew that she was headed for Terminus, and they were essentially on her tail. Just one problem. The way Maggie seemed to have gone was through a long, dark tunnel filled with snarling walkers. Glenn and Tara decide to go through, but Abraham thinks it is too risky for Eugene (remember, he has to stay alive because he “knows how to save the world”). So, they part ways. Awkward moment of the episode: Before Glenn and Tara head into the tunnel, Eugene’s heartfelt goodbye is, “I have to say, you are seriously hot, Tara.”

In the tunnel, things took a turn for the worse. Surprise. So, the ceiling had collapsed, trapping a bunch of walkers and blocking the tunnel. Glenn is determined to make it through and they push forward, but Tara’s foot gets stuck in the debris. After some struggling, Tara was definitely stuck. She basically gives in and says Glenn should go on and leave here there when — drumroll — Abraham’s group and Maggie’s group roll up in a truck, taking out all the walkers, saving Tara and Glenn! Turns out, Eugene knew he had to live with himself after he saves the world. Go Eugene!This episode brought a little more of Tara’s character to the surface. We learned that Tara feels like she owes her life to Glenn, and will go anywhere with him to help him to be reunited with Maggie. She also told Glenn how disturbed she had been with the was The Governor/Brian had acted — she never wanted to attack the prison, and she never wanted anyone to die in the confrontation.

Daryl’s new group is a pretty rough and brutal bunch. Fortunately, they are also big fans of following the rules. The group’s leader, Joe, was the one who coerced Daryl to stay with the group, assuring him that he needs other people and he can’t survive on his own. Joe explained, “Ain't nothing sadder than an outdoor cat thinks he's an indoor cat.” Staying with this group does have it’s risks. They live by the law of “claimed” and kill those who lie or steal. Not to mention, remember the scary dudes that broke into the same house Carl, Michonne, and Rick were staying in — yeah, these are the guys.