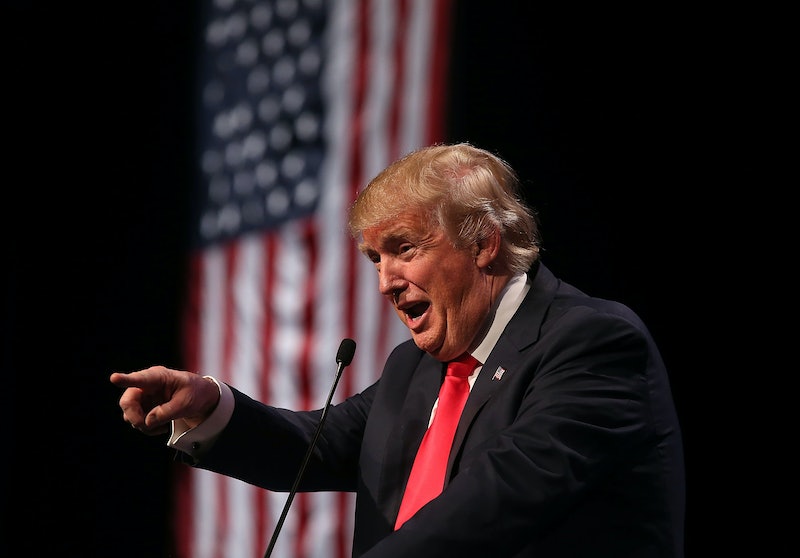 Since announcing his presidential campaign last summer, Donald Trump has used some pretty coded (and sometimes much more overt) language to talk about minorities and marginalized groups. His latest comment on inner cities in America, made at the Oct. 9 presidential debate, incited a wave of criticism from people who saw through Trump's thinly veiled racial stereotyping. People want Trump to learn about the inner cities, because if he were to be elected president, he should probably know some basic facts about his country.

Aside from the fact that his choice of words was meant to cover all black and brown people, Trump is just factually inaccurate in his talk about inner cities. “You go into the inner cities and you see it's 45 percent poverty. African Americans now 45 percent poverty in the inner cities,” Trump asserted. But that's not true at all. According to the Census Bureau, only about 26 percent of black residents in metropolitan areas live in poverty. Even in Detroit, one of the poorest big cities in America right now, the African American poverty rate is still below 40 percent. Furthermore, 51 percent of African Americans and 59 percent of Hispanics now live in the suburbs, indicating that the "inner cities" don't at all look like what Trump thinks they do.

Trump is trying to subtly play on outdated, racist stereotypes which depict black and brown people in need of a white savior, and people are jumping on the chance to call him out on it. Here are nine important things people want Trump to know about his inner cities comment.

No One's Buying Your Coded Language

The World Is More Complex Than Your Incessant Simplifications

People Have Noticed Your Pattern

It Makes You Sound Racist

There Are No Limits To Where Minorities Can Live

There's A Perceived Intersection With Your "Law And Order" Rhetoric

Gentrification Is A Bigger Concern For Many Minorities

Trump's grandiose oversimplification of a complex issue is just one more example of how unfit he is to be president. The leader of this diverse and intersectional country needs to understand the nuances that make up its various problems, and Trump has demonstrated a clear lack of the understanding he would need to be a truly great president, for minorities and everyone else.