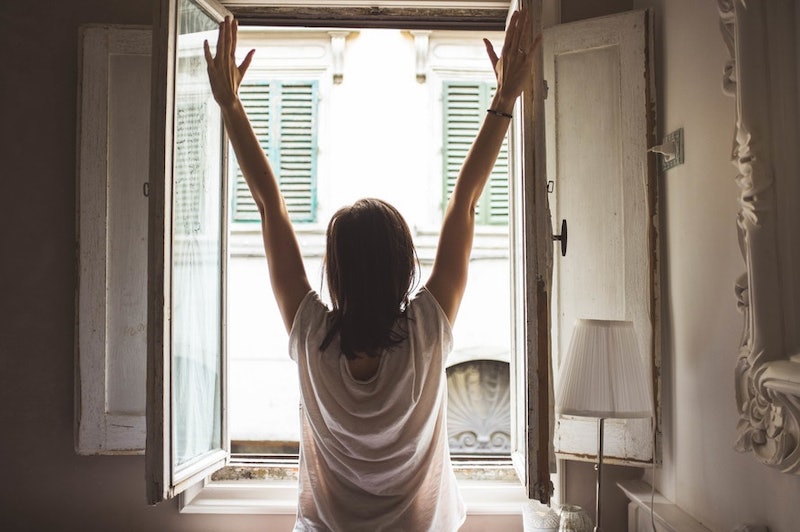 Sometimes a homemade t-shirt can speak volumes, as was the case on October 10, when one brave girl wore a "Grab My Pussy, I Dare You" shirt to a Trump rally. In less than 24 hours, pictures of her powerful silent protest have spread far and wide across social media, gaining thousands of likes and retweets.

High school senior Anna Lehane, 18, attended the Wilkes-Barre, Pennsylvania rally with friends Noah Frace, 18, and Erin May, 17. The three teens knew that though the crowd of supporters would drown out their voices, sometimes fashion has a way of being heard. The morning of the rally they created the statement shirts, Frace and May's had the phrase "Black Lives Matter" printed on them, while Lehane's read "Grab My Pussy, I Dare You" in stark black type. The three teens cited the shocking 2005 audio recording released by The Washington Post where Trump alludes to forcibly groping and kissing women (and Billy Bush laughs at his lewd remarks like a hyena on steroids) as their impetus for buying the rally tickets on Friday, Oct. 7. They never thought that standing up for their beliefs would go viral.

Trump rallies and events have been particularly dangerous for protestors this election year. Incidents of protestors being pepper sprayed, sucker punched, and violently shoved by Trump supporters have been all too frequent, but the teens didn't stop to think that they could be putting themselves in danger. Lehane told ELLE.com in a phone interview that she felt like there was safety in numbers, and she "wouldn't have been able to do it without friends."

Lehane reinforced her dissent by accessorizing her outfit with a Bernie Sanders pin. The first-time voter can't wait to make her voice heard at the polls this November. "Hillary Clinton wasn't my first choice, but she stands for women and I stand for women," Lehane explained to ELLE.com, "And Bernie Sanders supports Hillary now — I'm not just basing my opinions on him, but I think Hillary is definitely the better choice for the President of the United States."

Trump has tried to excuse his lewd statements, most notably "Grab them by the pussy. You can do anything" as "locker room talk," and minimize the incident saying that it doesn't truly represent him. When Hillary addressed the recording during the second presidential debate she made it clear that this is a systemic behavior, stating, "I think it's clear to anyone who heard it that it represents exactly who he is. Because we've seen this throughout the campaign."

Unfortunately, these statements have not deterred all Trump supporters. Lehane, amidst hundreds of men and women wearing red baseball caps reading "Make America Great Again," attracted some negative attention. "There were a lot of weird comments by creepy old men," Lehane told ELLE.com. "One man, he looked to be my grandfather['s age], honestly, he said 'I always like a good dare.'" Yuck. Double yuck.

So why did Lehane decide to put herself through such an ordeal in the first place? "You can't control how I vote by grabbing my whatever. The fact that I'm a woman doesn't mean that I'm easily influenced or controllable or someone who shouldn't be taken seriously," Lehane explained to Elle.com. "I hope people will take away that the opinion of every person matters. It doesn't matter your race, gender, or age, whatever. You need to value yourself and what you're trying to say and you can't let anybody, no matter how powerful they may seem, quiet you."

Bustle has reached out to Anna Lehane for comment and will update the article as we hear back ...