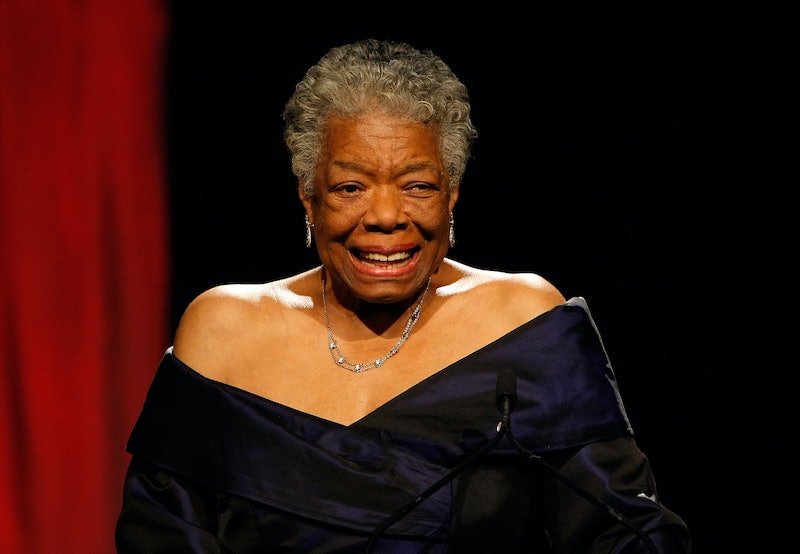 Maya Angelou, the renowned poet, author, activist, and all around beloved human being, has never been the subject of a feature documentary before, surprisingly. Yet all that is, rightly, about to change with the release of American Masters PBS's new documentary, Maya Angelou: And Still I Rise . The documentary, out Oct. 14, from directors Bob Hercules and Rita Coburn Whack takes its title from Angelou's most famous poem, "And Still I Rise," which has become somewhat of a battle cry for the disenfranchised, the oppressed, and anyone who has ever suffered hardship. Maya Angelou: And Still I Rise is an important film to see as the presidential election approaches, especially for artists who might be debating whether or not to get political with their work.

The new documentary chronicles Angelou's life from her birth in 1928 to her death in 2014, focusing on how she grew into the author and civil rights activist who influenced elections and inspired some of the leading cultural icons in America. In 1993, she became the first poet to perform at a Presidential inauguration, reciting an original poem, "On the Pulse of Morning" for President Bill Clinton. In her final years, she campaigned for Hillary Clinton and President Barack Obama. She was an artist, yes, and an acclaimed one at that, but she was also a political figure.

In an interview with The Washington Post in 1978, Angelou described herself as "a social humanitarian and a poet." To her, there was no real distinction between an artist — a writer — and an activist. And, as an African American woman, she advocated for civil rights and racial and sexual equality in her work. Angelou's activist artist model has influenced some in pop culture today — Common, Oprah, Ava DuVernay, and even Olivia Newton-John have said they've been influenced by her work. And, through her influence, many artists have become more politically engaged. But not all modern day artists have taken after Angelou's political lead.

As the 2016 election draws near, pressure is mounting for everyone and anyone to take a side: are you with Hillary Clinton or Donald Trump? In the wake of Trump's leaked comments in which he, essentially, brags about committing sexual assaults, pressure is mounting on GOP members to choose to either renounce Trump or stick by him. And that pressure is creeping into pop culture as well, with celebrities like Taylor Swift being brought under fire for staying politically silent. Now, Swift and other celebrities have the right to keep their vote and political affiliations to themselves. However, the voice of an artist is loud and important — it has impact. Angelou knew that, and she felt an obligation to use that voice. It is notable, then, that Maya Angelou: Still I Rise will hit theaters in the month leading up to the election. Perhaps, seeing her life through the lens of the new Maya Angelou documentary will inspire others to do the same.