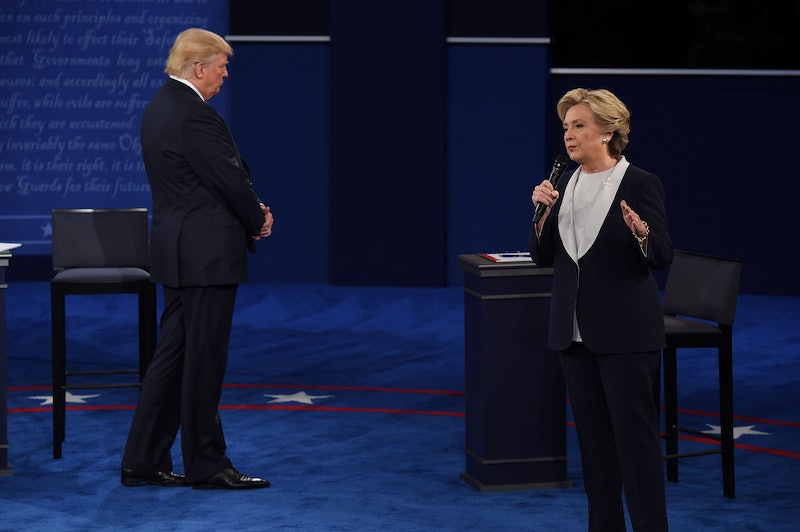 It's hard to believe we're coming up on the last presidential debate of the election. This political battle royale has gone by quicker than expected, with the third and final presidential debate at the University of Nevada, Las Vegas just around the corner. While it may sound overwhelming to pick a place to watch the final face-off between Democrat Hillary Clinton and Republican Donald Trump face-off on Wednesday, Oct. 19, there are many resource for finding a last presidential debate viewing party that suits your needs.

Given the potentially heated nature of the final debate, if you're feeling extra incentive to watch the debate alongside a politically like-minded crowd, you can search parties directly from the website of your candidate of choice. The event-finder on Clinton's website can direct you to viewing parties, as well as Trump's debate watching RSVP page. For those tuning in that feel less inclined towards either of the major candidates, the website for Green party candidate Jill Stein provides links to Facebook Live updates from Stein during the debate, as well as a search engine for debate watching parties for Stein supporters. Similarly, the website for Libertarian candidate Gary Johnson provides a localized search engine for debate watching parties and live-streams of his rallies. Really, the world is your oyster and all the candidates's websites provide pearls of debate parties, depending on your needs.

If you're more interested in a cinematic atmosphere than being surrounded by politically like-minded debate watchers, many movie theaters are hosting debate parties. In fact, select Regal Cinemas hosted viewing parties for the second debate. While Regal Cinemas has yet to confirm at the time of writing whether or not it will host the final debate, if you search both the local theaters and chains near you, you're likely to find a party where both candidates are projected in high definition!

Of course, there's also the very smart option to host a debate party yourself! That way you can ensure that while you may not agree with everyone at the party, you at least know and like them. The thought of hosting a debate part may be intimidating at first, but the League of Women Voters has a handy debate-party watching guide that can give you all the hot tips.

Have no fear. If all of these party options overwhelm you, but you still feel inclined to watch the final nail in the coffin of this election, you can snuggle up in a blanket, make some popcorn and watch the debate on any of the major cable news channels, which include C-SPAN, ABC, CBS, FOX and NBC, CNN, Fox News, Fox Business Network, and MSNBC.