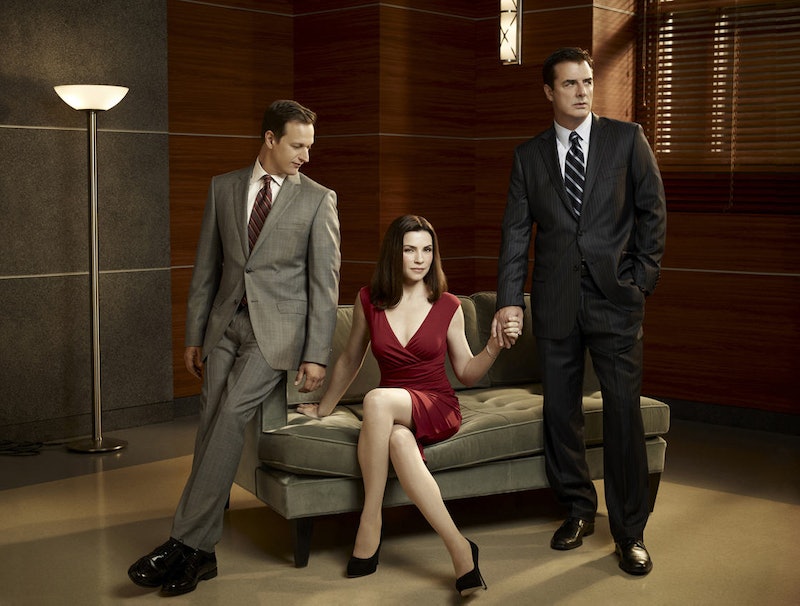 Admittedly, I don't watch The Good Wife. Apparently, though, I'm the only one who doesn't, because last night at 9pm, my Twitter feed consisted solely of people live-tweeting the events of the episode. From the little I could understand, it seems there was a trial and Hunter Parrish and something Scandal-like about voter fraud, but I'm not really sure. All I know is that at about 9:55, the tweets suddenly stopped. And about five minutes after that, they started again — but this time, they all consisted of the same general language: "no. no. NO." (And stop right here if you haven't seen Sunday night's episode. This is your requisite spoiler alert!) Even without ever having seen a Good Wife episode, I, a TV lover, knew exactly what that meant: a major character had died. And, in Good Wife's case, it was Josh Charles' beloved Will who kicked the bucket.

I may not watch The Good Wife, but I do know a lot about death — TV death, that is. My favorite shows are Breaking Bad and Buffy the Vampire Slayer. I've seen every episode of Game of Thrones. Ten seasons in, I still sit down each week to watch Grey's Anatomy, followed by a nice, light episode of Scandal. I know what it's like when a TV character dies unexpectedly, especially someone who was as loved as The Good Wife's Will apparently was. Here's how to deal with your favorite character's death, in stages that might look a bit familiar:

Maybe the show's creators managed to keep the character's death a secret, but there's gotta be some hints of what to come. Did an actor choose not to renew his contract earlier this season? Was the show on a creative roll, and knew that it could hold viewers' interest no matter what it did? Did TV reporter Michael Ausiello tease a major TV character's impending doom? In The Good Wife's case, the answer was two out of three. Will's death wasn't a certainty, but if you'd done your homework beforehand, you might not be walking around today with a bewildered expression on your face and three boxes of tissues at hand. Just kidding: even deaths that you sense are coming hurt like hell.

So the episode's on. So far, so good, just your normal day in the lives of your favorite characters. All of a sudden, something happens. Maybe it's an explosion going off in a building a few miles away. Maybe it's someone just noticing a character's absence from the latter half of the episode. Maybe it's a gunman shooting up a courtroom. Whatever it is, you're suddenly filled with dread. Something bad is about to go down.

And then it happens. Sometimes, the series shows the entire death, from the character's first "who, me?" expression to his/her final, gasping breath. Other times, the series chooses to skip the main event and show it after the fact. An announcement is made, relatives are called, but the actual death is left off-screen. The latter option may be less graphic, but the trauma is worse. Whichever way the series goes, though, if you didn't see the death coming — or even if you did, and refused to admit it could happen — realizing that your favorite character hurts. You're left in a state of shock, only able to mouth the word "no" and write angry, sad emoji-filled posts on Twitter.

Now that it's happened, you can't believe it's true. Despite the showrunners' confirmation and the #RIP hashtags online, you can't fathom the idea that they'd actually kill off THE BEST PERSON ON THE ENTIRE SHOW. It just can't be true. So you maniacally think of ways the character could resurrect, even if your show has nothing to do with sci-fi or fantasy. Perhaps it was all a dream, or some messed up what-if scenario. All you know is that the character can't actually be dead. Why?

Because clearly, that'd be the worst thing that could ever happen to your show. There's no reason to kill off Will/Denny/Mrs. Landingham, because they were the best character in the series. There were a thousand other people who could've died instead, characters who haven't done anything useful or even remotely entertaining since season 1, and instead, they killed him/her?! It makes you so angry that you ignore all those heartfelt explanatory letters from the series' showrunners and refuse to watch any more episodes for the rest of your life.

Until you do. Because even though you hate everything about the show and want to send angry emails to the showrunners every day, you know that you have no choice but to continue. You're addicted to the show, and even though they killed off the best character, you can't stop watching. So you sit there, week after week, trying to enjoy everything else the show has to offer but really, just wanting to see Charlie/Tara/Omar again. You have trouble focusing on the non-TV aspects of your life, because every time you look at Twitter, there's someone else watching the heartbreaking episode for the first time, or another "explanation" as to why the character had to be killed. It's all too much to handle.

The season's coming to an end. You've spent the last few months feeing sad and bitter over the character's death, but now, you want to move forward. You read those showrunners' letters. You watch the trailer for the actor's first post-show movie. You stop waiting to hear "it was all a dream!," and you don't spend every episode hoping for a flashback. You may not like it, you may never understand it, but you're starting to accept it.

And then, finally, one week, as you're sitting in front of the TV, something amazing happens: You laugh. Or you smile. Or you cry, but for some other, non-death related event on the show. All of a sudden, you find yourself enjoying the night's episode, all because of events and plotlines unrelated to the killed-off character. It's not until the episode's end that you realize you haven't even thought about him/her once. Suddenly, you realize: it's possible to enjoy the show without Lexie/Catelyn/Jin and Sun. Other people on the show you never gave much thought before start to seem more appealing. Was Giles always that witty? Was Sawyer always that hot? (Just kidding. Of course he was.) Before long, you have new favorite characters; no one can't replace the person you lost, of course, but maybe, the show can go on without him/her. And if the show can do it, so can you.