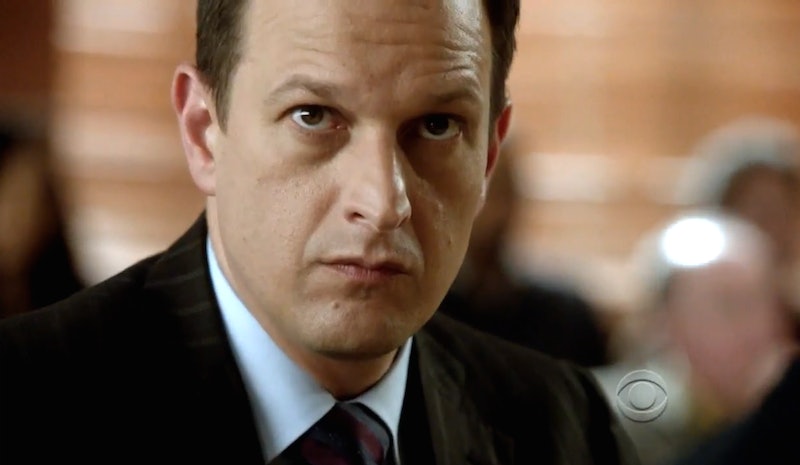 Fact: we’re five seasons in, and The Good Wife just keeps getting better and better. Network CBS promised that last night’s episode, “Dramatics, Your Honor,” would be one that “everyone would be talking about,” and they weren’t kidding! “Dramatics, Your Honor” had it all: a thrilling case, phenomenal acting, and a final act twist that shook the show to its very core. Was it a “shocking” twist? Absolutely. But it was also an earned one. It wasn't a convenient plot device that just popped out of nowhere — very important hints were peppered throughout the episode. Now that it’s all over, the one question on my mind is: should we have seen Will's death coming??

It's true: last night, we were forced to say goodbye to Will Gardner. I can’t believe it. Will Gardner, founding partner of Lockhart/Gardner, Alicia Florrick’s former lover and perhaps her one true love, is dead. What made “Dramatics, Your Honor” so incredible is the way that the writers (creators Michelle and Robert King) gave us subtle hints throughout the episode of Will’s impending death. Looking back, here are the clues I picked up:

Jeffery Grant’s increasingly unhinged mental state was made apparent throughout the legal proceedings. When Grant looked around the courtroom during the episode’s opening shot, he couldn’t hear what anybody was saying. In his head, they were all being drowned out by loud music. It was as if he’d lost the ability to process the events going on around him. He was also having a rough time in jail, arriving to court each day with a new injury. When Will offered to have Grant transferred to solitary confinement to avoid further harassment, he responded, “I’ll kill myself in solitary.” Clearly, Grant was not mentally stable.

When Diane Lockhart saw Will scrambling to come up with a new strategy in the Grant case, she intervened. She wanted to give him a little wake-up call: had he explored the possibility that Grant might actually be guilty? Was his judgment clouded because he liked Grant? A seed of doubt was planted in viewers' minds — maybe Will wasn’t standing in court next to an innocent man after all. Maybe Grant was capable of murder. Also, it’s important to note that Diane said that if Will needed any help, she’d just be in the courtroom next door. Was this foreshadowing?? Or am I reading into things?

Last episode, Alicia and Will finally reached an understanding about their relationship — they would be competitors from now on, not friends. But in this episode, Alicia went out of her way to warn Will that his clients were shopping around for a “second opinion,” and he was truly thankful. Grateful, even. You could see it in his eyes (gosh, I’m going to miss Josh Charles). Alicia and Will shared a real, genuine emotional moment for the first time in months. It was almost as if their relationship finally had some…closure? Despite all that talk from last week, they could still be friends. The scene had this strange sense of finality to it. I can’t really explain it, but it was there.

When Kalinda revealed that she was thinking about leaving Lockhart/Gardner for the millionth time, Will mostly brushed her off, but added that she couldn't leave the firm because he would miss her too much. Wow. That’s pretty big coming from Will, a character who has never really been all that open with his feelings. It’s almost as if the writers were trying to “wrap up” the major relationships in Will’s life, one by one. (Diane didn’t have a standout moment like Alicia and Kalinda, but she demonstrated her care for Will by recognizing that he was drowning with his case and rushing in to try to save him.)

Where Do We Go From Here?

I know, I know, “hindsight is 20/20,” but if you were paying close attention, I really do think you could have predicted last night’s traumatizing turn of events...or at least had a good idea that something was going to go horribly, terribly wrong for Will.

The season preview we were treated to at the end of the episode was intense, to the say the least. How will Lockhart/Gardner survive without Will at the helm? Will Diane get to take sole control of the firm? Or will that sneaky snake divorce attorney David Lee make a move to usurp the throne? And how will Alicia take the news of Will’s passing? What effect will it have on her fragile relationship with Peter? And what about her fledgling law firm? “Dramatics, Your Honor” certainly left us with a lot of burning questions, but that’s a good thing. We’re five seasons in and creators Michelle and Robert King still know how to keep the drama interesting and the viewers hooked. I’m just happy to be along for the ride!

Michelle and Robert King wrote a letter to the fans explaining their reasoning behind Will's death. Also, apparently Charles wanted off the show at the end of last season, but Julianna Margulies convinced him to stay for one more.