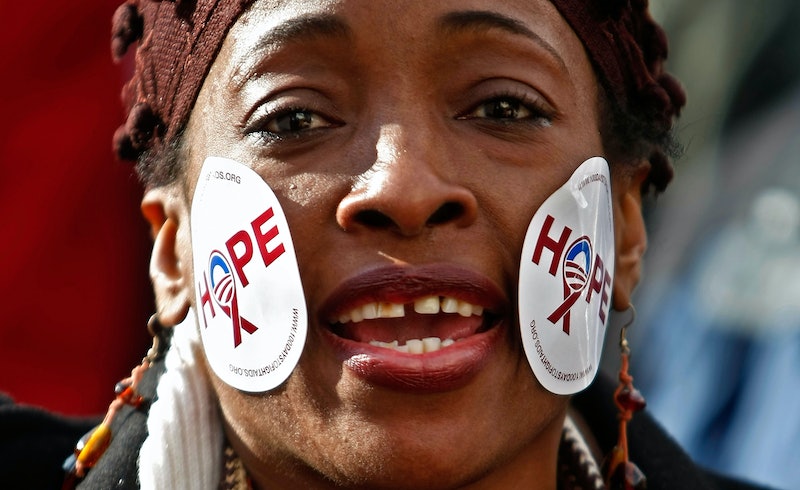 With 28 days left until the 2016 general election, we're in the home stretch. This election has been particularly grueling, with the two main party candidates constantly in the news for reasons other than their proposed policies. Republican nominee Donald Trump is constantly offending someone though his words or actions, and Hillary Clinton is consistently experiencing the fallout from past mistakes, like her private email server. No other election has featured a candidate who has said such blatantly sexist, offensive things like Trump does, and a British newspaper captured the contrast between now and the 2008 election in a single picture.

The front page of the The Private Eye, a satirical British magazine, features side-by-side pictures of President Obama's 2008 "Hope" campaign poster and a picture of Donald Trump with the word "Grope." Trump's picture references the comments he made on a leaked tape from 2005, on which he is heard bragging about hitting on women and saying that he could "grab them by the p*ssy." Trump apologized for the comments, but the damage was already done. Many Republicans denounced Trump, and some voters even said they could no longer support him.

It's sad to have those two images as a contrast on the nature of recent elections, and it brings up an important point about the state of our election. Although we would like to talk about policy issues and allow candidates to present campaigns of hope and change, that just isn't happening. Voters can't just ignore the hate that Trump spews, or the incredibly offensive comments he makes about people's appearances or races.

During the 2008 and 2012 elections, neither John McCain nor Mitt Romney had anything near as horrible as Trump's comments come out against them. Yes, there were some gaffes, but nothing so insulting as to compare to Trump's attitudes toward women, foreigners, and Muslims. In August, during a White House news conference, Obama declared Trump "unfit to serve as president." Obama had said that while he disagreed with McCain and Romney on policy issues, he never believed they were unfit for the job. This marks the seriousness of the situation, and shows just how much things have changed since Obama's campaigns.

America doesn't need a leader who will spur headlines over who he offended that day. We need someone who is willing to check their prejudices at the door and deal with others in an adult, mature way. The Private Eye is just one more reminder that Trump is not that kind of person, and would not be that kind of president.

More like this
Boris Johnson’s Leadership Is In Question – Again
By Bustle UK
Police Shove 'Full House' Star Jodie Sweetin At An Abortion Rights Protest
By Radhika Menon
5 Ways To Stand In Solidarity With Women In America From The UK
By Sophie McEvoy
How To Fight For Reproductive Rights, Based On How Much Time You Have
By Courtney Young
Get Even More From Bustle — Sign Up For The Newsletter