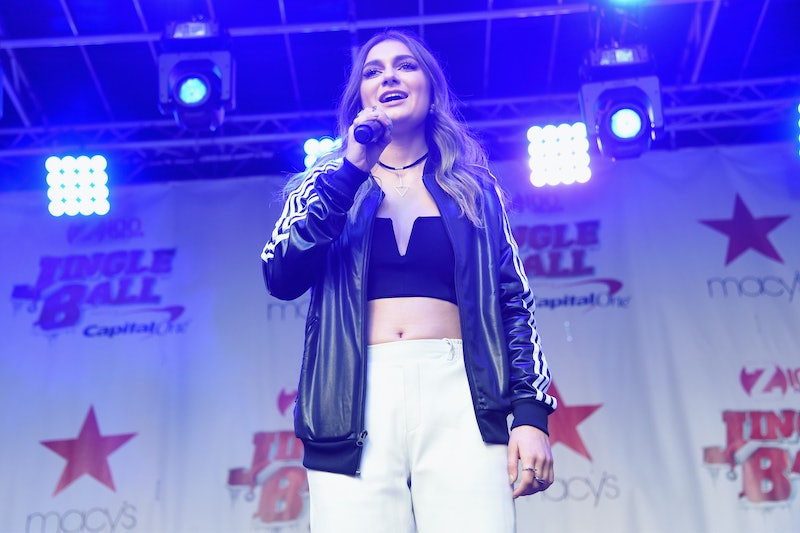 With only two months left until winter, it's the perfect time of the year to start getting psyched for the holiday season and all of the awesome events that come with it. On Tuesday, Oct. 11, iHeartRadio gave fans another reason to be even more excited for the months ahead, as it announced the dates and lineup for once such event, the 2016 Z100 Jingle Ball, which is coming to 15 cities with over 20 musical guests. To help celebrate the news, pop star Daya took the stage at the Jingle Ball 2016 Official Kick-Off event at Macy's Herald Square, where she shares the empowering message behind her debut album Sit Still, Look Pretty with Bustle.

"Sit Still is about not feeling limited in what you can do, no matter if you're a girl or a guy," Daya says. The singer/songwriter, who will perform at many Jingle Ball dates, especially wants her debut album to send a message of strength to her female fans. "I want to empower [women], and I want to let them know they should go for their dreams and ambitions, and not let people try to limit them to being a certain way or acting a certain way," she says. These words are especially inspirational when you remember that Daya is only 17, but already wants to have an impact on fans — and is already a star. Thanks to her first single "Hide Away," she quickly rose to fame and has three hits on the Top 40 chart, including the title track of Sit Still, Look Pretty.

That platform may soon be growing, as the singer is preparing for her first headlining tour, which will begin on Feb. 18, 2017 in her home state of Pennsylvania. With so much recent success and fantastic opportunities on the horizon, her next big goal is to take her show beyond the states. "I would love to go on a world tour at some point," Daya says. "I love traveling, and I love performing for people, so it would be really fun." Hopefully, that dream will come true sooner than later so even more young women around the world can be inspired by her message.

Plus, as many fans should see Daya live as possible, based on her performance at the Jingle Ball Kick-Off. Daya performed "Sit Still, Look Pretty," followed by her first hit "Hide Away," to give the audience a taste of what the concert will be like this year. Hundreds of fans of Daya and Charlie Puth, who also made an appearance, wore festive elf hats and reindeer ears as they crowded in front of the stage, cheering enthusiastically for their favorite artist.

If all of this talk about concerts has succeeded in getting you completely excited for this year's Jingle Ball and its many, fantastic acts, don't worry, there's still time to get your own tickets for the event. The Capital One Cardholder Pre-Sale begins on Oct. 13 at 10 a.m. local time and goes through Oct. 16 at 10 a.m. local time, or until pre-sale tickets are gone. Tickets officially go on sale to the public beginning on Oct. 17 at 10 a.m. local time. And Daya isn't the only artist you can look forward to seeing if you attend one of the concerts. Check out the 2016 Jingle Ball schedule and lineup below.

If you nab tickets to one of Daya's Jingle Ball dates, you're in for a show that is both entertaining and empowering.