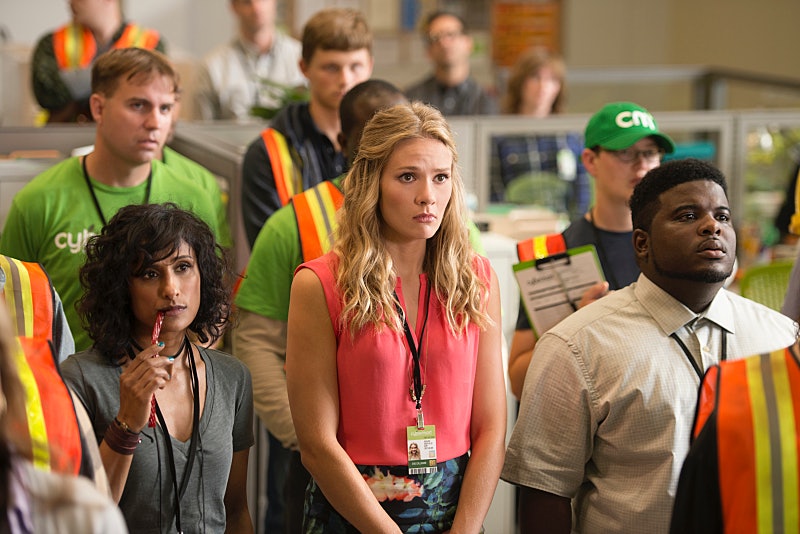 I don't know about you, but I love a good best friend on television. So when it comes to No Tomorrow , I'm all for Kareema and Hank. Both are currently secondary characters, fulfilling the sidekick/best friend role in the two episodes we've seen so far. That said, I am of the mind that we need more of them in our lives immediately, especially where Hank is concerned. Considering that both Kareema and Hank could offer some varying viewpoints and levels of levity to the plot distinct from Evie and Xavier's story, I hope we get see a lot more of the former duo as the first season of No Tomorrow continues.

We're two episodes into the series and at this point, Evie's closest work friends still exist in a pretty amorphous state. Kareema is decidedly wry and unfazed by her high-key friends, while Hank is still occupying the "cute and cuddly" friend-zone, which comes across as bemusing when he decides to play against type and is given the chance to be sharper with his friends. To their credit, Kareema and Hank are incredibly enigmatic characters, too. Who are these two people, outside of their relationships with Evie? They're certainly inviting enough that we get to see their group banter amongst one another, but I would like to see a plot that puts them at the center.

We don't yet know much about their personal histories or how they came to befriend Evie. And while Hank has been fleshed out a great deal more than Kareema (becoming linked as a trio with Evie and Timothy and serving as a love interest to his uptight boss, Deirdre), both still need some more definition.

In consideration of all of this, I'd also be remiss if I didn't not that these two characters are people of color. While I am wholeheartedly intrigued by Kareema and Hank because of the characteristics they exude, I am also hoping No Tomorrow gives them a chance to live and breathe as their own beings, potentially explored within their own unique world views, without being placed on the sidelines as the BFFs to a white lead character.

I know we've still barely scratched the surface of No Tomorrow but as it stands now, I am all about Kareema and Hank. Since the series has only just begun, I'm hoping that it will reveal more about them as it continues and let them carry some stories of their own — before the apocalypse strikes.