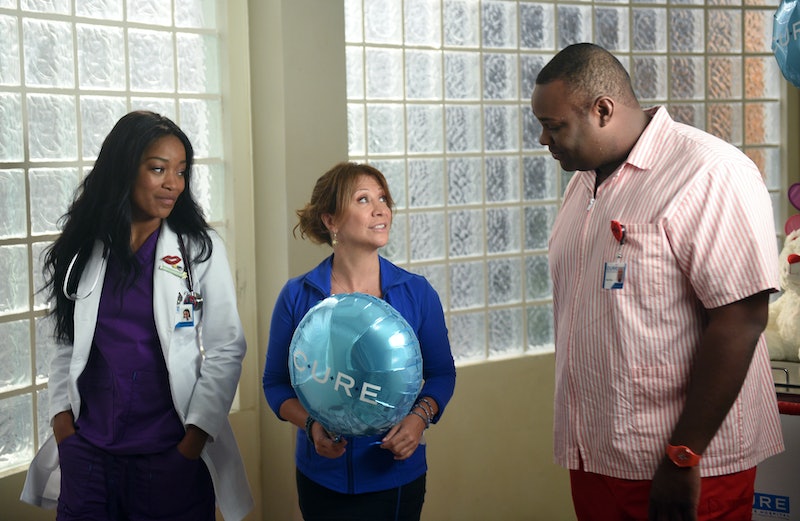 On a show full of mysterious characters, there's one woman who's an open book and never keeps her cards close to her vest. I am, of course, referring to Denise Hemphill on Scream Queens — and this season, we would be wise to remember that she's now Special Agent Denise Hemphill. It's no secret that, for inexplicable reasons, she is convinced that Zayday Williams is behind basically every sinister occurrence on this show. So, when the Green Devil spared Zayday's life on Scream Queens, Denise predictably jumped to the conclusion that she and the Green Devil are (you guessed it!) in #cahoots.

Here's how it went down — the Green Devil showed up at the CURE Institute Hospital (which apparently has a seriously subpar security system) and decapitated poor Sheila Baumgartner (guest star Cheri Oteri). The axe-wielding villain thankfully wasn't able to kill Chamberlain Jackson, but there was a strange moment between the Green Devil and Zayday — he or she looked directly into Zayday's eyes and then unceremoniously walked away from the show's resident genius without even attempting to harm her. Needless to say, Denise Hemphill finds this mighty suspicious and it certainly bolstered her case that Zayday may have some involvement in the murders.

Don't get me wrong, Denise — I adore you, but I just think you're barking up the wrong tree (again) when it comes to Zayday. I don't mean to be hard on you, but didn't you learn anything when you were dead wrong about her in Season 1? Plus, Zayday seems equally perplexed about why the Green Devil spared her life and, because she's arguably the most proactive character on this show, she immediately vowed to figure out why she's not being targeted by this season's villain.

Last season, Zayday's life was spared because one of the Red Devils, Boone, had a crush on her. Is this latest bloody incident a clue that the Green Devil is a character who loves or cares about Zayday? It could be one of her friends (speaking of which, where the heck is Grace this season?) or perhaps another serial killer is smitten with her. Time will tell — but for now, I'm going to have to respectfully disagree with Special Agent Denise Hemphill. If Zayday is connected to the Green Devil in some way, she's still in the dark about it. But, knowing Zayday, she'll work tirelessly to get to the bottom of this.