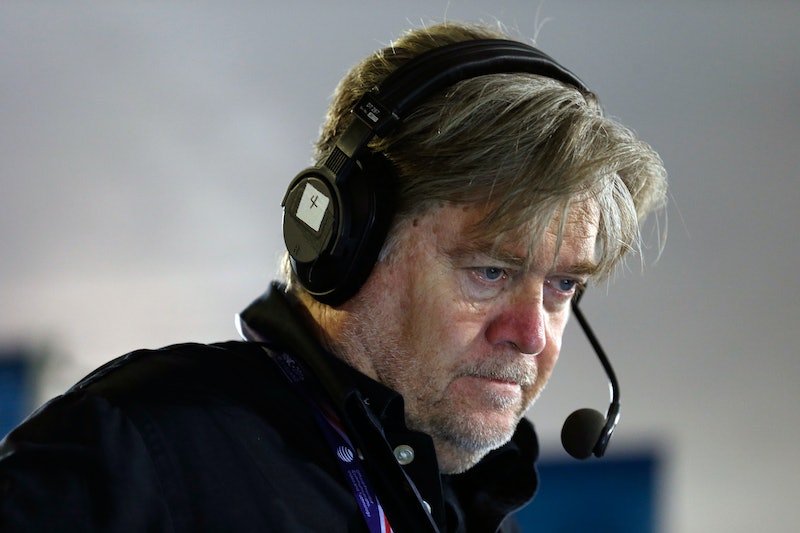 On Tuesday, The Hill reported on a leaked email from Donald Trump campaign CEO and former Breitbart chairman Steven Bannon detailing his commitment to bringing down House Speaker Paul Ryan. But quite frankly, intra-party tiffs existing between Republicans is old news — Ryan, among other right-wing politicians, was hesitant to endorse Trump from the beginning. The leaked emails reveal something that should make you much more concerned: Bannon's outlook on mental health in America.

The internal Breitbart email obtained by The Hill dates back to Dec. 1, 2015. Matt Boyle, Breitbart's Washington editor, suggests in writing to Bannon that the notoriously conservative site promotes Ryan's plan for the mental health system in an effort to form a more positive relationship with the House Speaker. Making it clear that he wasn't on board with the idea, Bannon offered an appalling solution to what he called the "mental health issue."

"I've got a cure for mental health issue," he said. "Spank your children more."

Ignoring the implications of that statement, Boyle added "I get that, but this is a place where we can open a bridge to Paul Ryan — we're playing the very long long long game Steve." Ultimately, Bannon didn't budge.

And that man — the one who's willing to so rudely diminish the seriousness of mental health in this country — is the person currently advising the GOP nominee.

The mental health reform in question was prompted by the Colorado Planned Parenthood shooting in November 2015 and advocated building upon the mental health workforce and making treatment more accessible. The following July — Breitbart promotion, or not — the bill was passed through the House. Ryan released a statement on the new legislation saying, "Today, the House took a major step to change the way our nation's health care system deals with mental illness. We need to make sure that the people who suffer from mental illness — just like any other patients — get the care and medications they need." Though some rightfully argued the bill could have accomplished more by addressing gun control as well, the fact that mental health was being acknowledged on a bipartisan basis constituted a step forward.

But forget actual medical treatment — a dated disciplinary practice that's being more widely perceived as corporal punishment will do just the trick, according to Bannon. And unfortunately, I'm hesitant to bet that Trump, who mocked a reporter with a chronic disability in November 2015 and later denied it, takes it much more seriously.