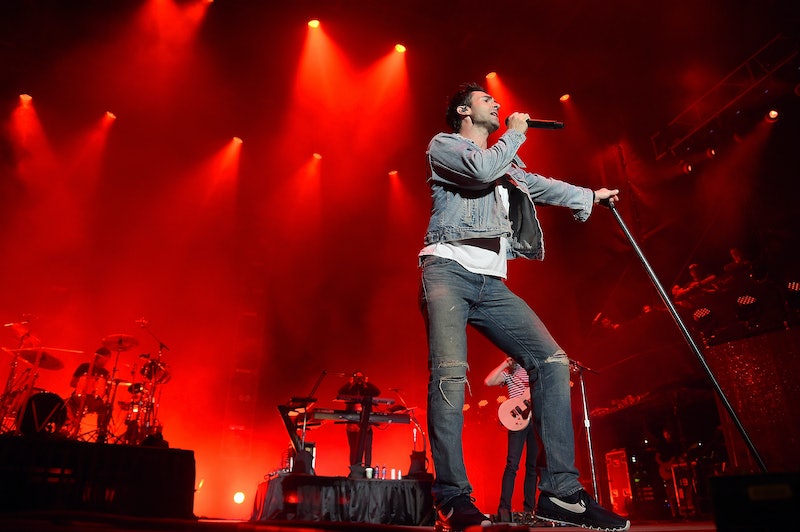 If you're looking for another fall jam after the so-called song of the summer failed to materialized, then let me direct you to Maroon 5 and Kendrick Lamar's "Don't Wanna Know" pop hit. Surprisingly, this isn't the first time that the musicians have all worked together. Lamar and Levine both guested on The Lonely Island's single "YOLO" in 2013, and, presumably, it was enough fun that they wanted to work together again. But, unlike that spoof song, the "Don't Wanna Know" lyrics tell a serious story — well, as serious a story as any pop song can tell.

So what does it sound like? It's a complete earworm that you'll listen to once and presumably still be humming 60 years later as a pensioner: expect peculiarly tropical beats for this time of year, some social media-referencing rap, and a chorus that feels like it makes up 90 percent of the song. But the focus of the lyrics feels a little weird, when you think about it; the song is all about yearning for an ex. It's all very Drake. And I know it's so 2016 to grouse about exes, but, well, Adam Levine got married to Victoria's Secret model Behati Prinsloo in summer 2014 and Kendrick Lamar's currently engaged to his long term girlfriend Whitney Alford, who he's been dating since high school.

So... sorry, but these guys may be the least qualified men in music to write this song. They're too damn loved up. Let's break this thing down and explore.

You're wondering why this is even necessary, the weird robotic voice doing a "hey" thing. Mainly because modern pop songs tend to dive straight into the chorus to hold the attention of frenetic millennials, so they needed this little set up so it wasn't too abrupt.

Cynical as putting the chorus at the start may be, it does mean that themes are established upfront: the singer's thinking about an ex ("The way I used to love you, no") and the fact that, since they're the singer's ex, they're free to do their thing — namely, going home with other people. Anyway, since absence makes the heart grow fonder, the singer believes that their feelings aren't past tense, but present tense ("I'm loving you so, so, so, so"). Translation: they're not over them.

Wasted (wasted)And the more I drink the more I think about youOh no, no, I can't take itBaby every place I go reminds me of you

I mean. Who hasn't been there? Trying to knock back a few drinks and, with them, knock that pesky ex out of your head. But since, in the right sort of mood, alcohol makes you sentimental and nostalgic, "the more I drink, the more I think about you." Amen.

The singer's got those heavy Morrissey vibes: sorrow and self-pity. Also, since his friends aren't mentioning the ex, the singer's quick to jump to conclusions: his friends don't want to rub salt in the wound by telling him that his ex has already found happiness in the arms of someone else.

And I every time I go out, yeahI hear it from this one, I hear it from that oneGlad you got someone newYeah, I see but I don't believe itEven in my head you're still in my bedMaybe I'm just a fool

But those conclusions sound as if they're more than theory: he's heard from people on the bar circuit that bae's got "someone new." But Levine demonstrates here how good your brain is at mucking up your getting over someone projectory: "Even in my head, you're still in my bed." Had me shaking my head at "Maybe I'm just a fool," though. Don't be so hard on yourself, Levine.

(Oh hey)No more "please stop"No more hashtag boo'd up screenshotsNo more tryin' make me jealous on your birthdayYou know just how I made you better on your birthday, ohDo he do you like this, do he woo you like this?Do he lay it down for you, touch your poona like this?Matter fact, never mind, we'll let the past beMaybe his right now, but your body's still me, whoa

OK, some of this is a little mysterious. I'm not sure I get the "please stop," part. But the rest of it seems fairly self-explanatory: the relationship that Levine's been pining over (if we're assuming Lamar's adopting the same character's voice, which I am) was a totally toxic one. The juxtaposition of "no more hashtag boo'd up screenshots" and "no more tryin' make me jealous on your birthday" implies their liaison was more appearance than reality. They looked adorable on social media together, but the partner still wanted to make him jealous (by flirting with other men in front of him? Mentioning other people?).

I'm also loving this line: "You know just how I made you better on your birthday, oh" — that's right kids, Kendrick Lamar is not too cool to reference the 2009 Jeremih hit "Birthday Sex."

But the last four lines are defiant: Lamar knows he was a great boyfriend in all those explicit ways that boyfriends go from good to great. So maybe bae's his right now, but, given the insane ways Lamar/Levine pleasured their ex-partner, their body will always somehow — through some spooky sex magic? — remain theirs. Weird.

Ultimately, while this song is all kinds of catchy and seems personal in its content, given the two vocalists' dreamy love lives, I'm finding it way too hard to read this as an autobiographical song. Maybe the meaning behind the lyrics is every bit as practical as the song structure itself: people will always have break ups, and therefore people will always need a new breakup song to jam to. This, you guys, is it.