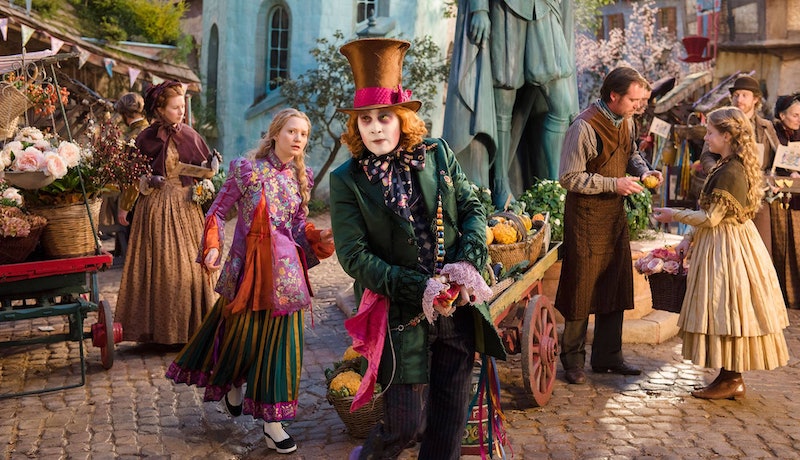 Alice Through The Looking Glass, the follow-up to Tim Burton's 2010 Disney live-action hit Alice in Wonderland, featured quite a few magical trips. First, our dear Alice made her return to Underland (or Wonderland, depending on who you ask) through a magic mirror, and then she traveled even further when she went back in time in an attempt to save the Mad Hatter. Or, maybe, she didn't take any trips at all. One of the main questions in Alice in Wonderland and the sequel is the reality of Wonderland. Does it actually exists, or is it just a figment of Alice's active imagination? The exclusive deleted scene from Alice Through The Looking Glass below could reveal whether or not Wonderland is real.

In Alice Through The Looking Glass, on DVD and Blu-ray on Oct. 18, Alice is driven to return to Underland when she spots a blue butterfly, her old friend Absolem, in her family home in London. When she spots him, he leads her to a mirror upstairs, and she chases him right through the mirror and into Underland. In Underland, she goes on a journey through time in an effort to save the Mad Hatter and, when she finally escapes back to London, she wakes up in a mental hospital where she has been admitted for hysteria. So: what's real — Underland or the hysteria? One of the Alice Through The Looking Glass deleted scenes might hold the answer.

The scene sees Alice running after Absolem through her home, interrupting a party and startling her ex-fiancé, Hamish. The scene is pretty simple, showing Alice disregard the party in favor of following Absolem — even going so far as to tackle Hamish after he smashes the blue butterfly, unaware as to who or what it might truly be. In the commentary from director James Bobin, that the scene was cut because it might have made Alice look "too crazy." As Bobin explains in the clip, Alice sees her friend, but everyone else around her sees a simple blue butterfly.

The dramatic ending of the scene, with the blue butterfly supposedly dead, or at the very least, injured, suggests, in a way, that the blue butterfly wasn't Absolem at all. The scene, then, would have made audiences doubt Alice and the reality of Underland a bit too much. In other words, it would have undermined the tension at the core of the film and of Lewis Carroll's books. "That's the great question of Lewis Carroll, is that, is this a dream, is it real?" Bobin says in the commentary. It's a question all viewers of Alice will be asking themselves while watching the film.