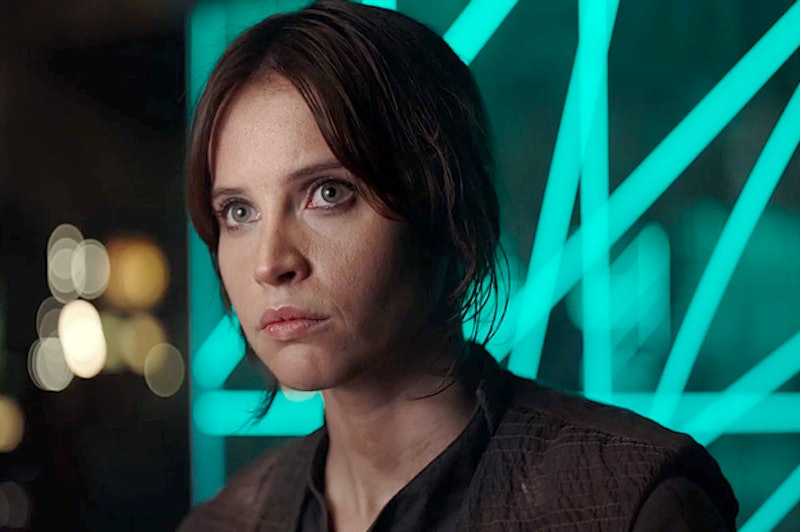 No one needs me to tell them that Rogue One looks incredible, and the fact that its release date is set for Dec. 16, 2016 makes it the best Christmas present ever. One of the reasons Rogue One looks so great is because Felicity Jones plays the lead role of Jyn Erso, a smuggler on the run from the Empire who's recruited by the Rebel Alliance to steal the plans for the Death Star. The British actress spoke to The Hollywood Reporter about preparing to enter the Star Wars universe, and Felicity Jones's Rogue One inspiration came from an unusual place. However, if you really think about it, her inspiration isn't actually that surprising.

Jones is such a versatile actress, and I can't wait to watch her play the lead in such an exciting new Star Wars movie. According to THR, she takes all of her roles very seriously, making a scrapbook for each character she's going to play. For Rogue One in particular, "she spent hours watching music videos, particularly those of Florence + The Machine." While actors are often described as being "method" if they invest themselves totally in a persona or character for the duration of a movie, I love the way that Jones draws her inspirations from diverse and unexpected places, people, and art forms.

According to the new interview, music videos played an important part in the way Jones constructed the character for Jyn Erso. The actress told THR, "So much of Jyn is movement. It became a very important part of finding her. She walks almost a bit like a caged animal. Her fight sequences become like dances." Any Star Wars fan knows that the franchise's fight sequences are not only legendary, but perfectly choreographed.

It makes sense that Florence + The Machine would form such a core influence for Jones's work on Jyn Erso, since lead singer Florence Welch is an incredibly physical performer, who expresses her emotions through her body as well as her voice. Florence + The Machine music videos are also renowned for being impressive, filmic productions, their inspiring visuals accompanying the band's atmospheric and emotive music.

Clearly, Jones was committed to creating a Star Wars character like no other, one that had her own walk and moved in a unique way. That she wanted to embody Jyn Erso in every way proves just how powerful an actress she is, and I'm more than a little excited to see Rogue One as soon as it comes out. Perhaps Welch could have a cameo in the next Star Wars movie?