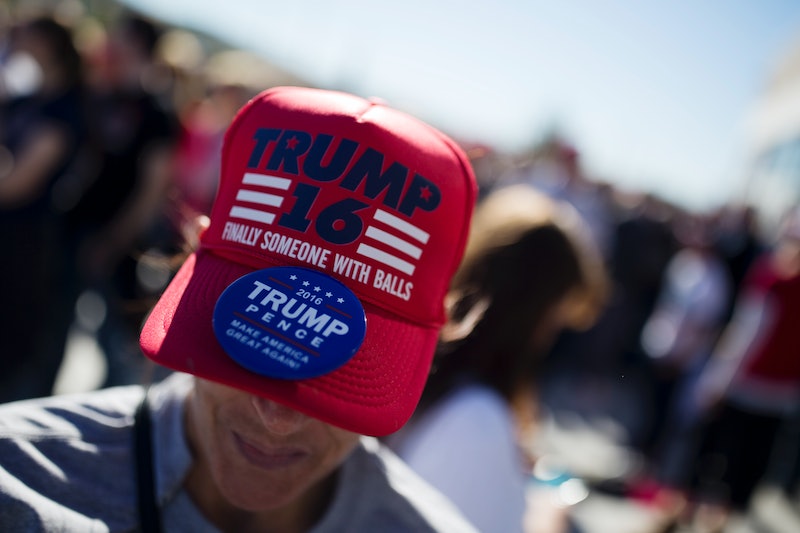 For some Donald Trump supporters, even the most dangerous sexism still isn't a deal-breaker. In a jarring Oct. 11 appearance on MSNBC's All In with Chris Hayes, Congressman Blake Farenthold indicated that he would possibly continue to support Trump even if the Republican nominee were caught on tape saying "I like raping women." The interview was disturbing, to say the least, but it revealed the deep-rooted sexism within the GOP, as well as how Trump can do no wrong to some Republican members.

Hayes interviewed Farenthold about his unwillingness to rescind his support for Trump after the release of a video in which Trump condones sexual assault, bragging that as a celebrity women let him do anything to them. After the release of the leaked tape, many Republicans withdrew their support for Trump's candidacy, including former presidential nominee Sen. John McCain. However, many others did not consider Trump's comments that he could "grab [women] by the pussy" without consent as disqualifying. Rep. Farenthold was among those supporters.

Chris Hayes attempted to find out whether Farenthold would view any amount of sexism as disqualifying: "If a tape came out with Donald Trump saying that, saying 'I really like to rape women,' you would continue to endorse him?" But for Farenthold, the answer was not immediately obvious: "I — again, that would be bad. I would have to — I'd consider it."

He'd consider it? If Rep. Farenthold, a United States congressman, heard his candidate straight up say that he likes raping people, he would think about maybe withdrawing his endorsement, but for him, it wouldn't automatically disqualify someone from the presidency. That's a profoundly horrifying statement, and a revealing one.

Later in the evening, Farenthold issued a statement in a series of tweets apologizing for the implication of his comments:

It's an unconvincing apology at best, considering that Farenthold has condoned Trump's recent comments about sexual assault by continuing to support him. The truth, it seems, is that even if Trump's comments about sexual assault were as unequivocal as the ones suggested by Hayes (and they were pretty close to that), Farenthold and others in the GOP wouldn't be offended enough to drop Trump. They might not even be offended at all.

Members of the GOP who have recently withdrawn their endorsements have referred to the Trump tape comments as the "last straw." But it's clear that for those who still support Trump, there is no last straw.

By failing to condemn even a hypothetical rapist, Farenthold made it clear that he is not truly disgusted by sexism, even in its most violent and dangerous form. His constituents, male and female, should take note.