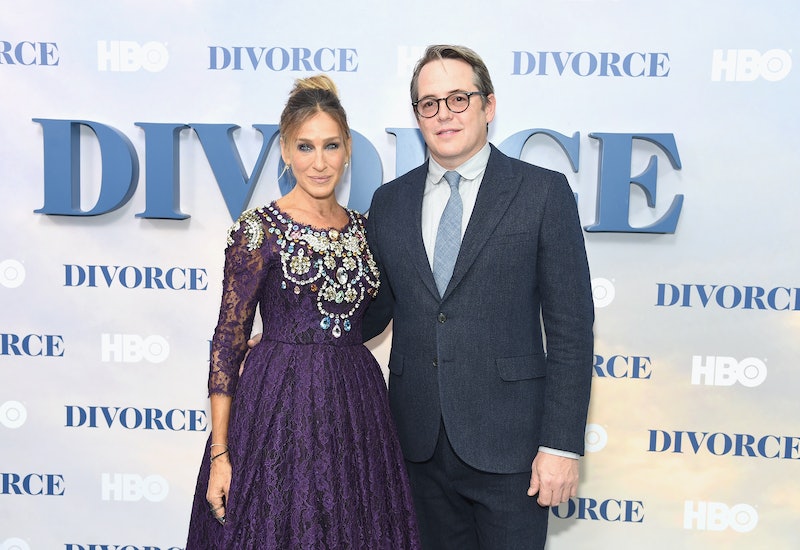 Unlike the protagonists Sarah Jessica Parker plays (whether Carrie in Sex And The City or Frances in Divorce), the actress is envy-inducingly loved up. Parker has been married to fellow thespian, Matthew Broderick (AKA Ferris Bueller) since way back when — 1997 — and, almost 20 years later, they appear to be one of the most rock-solid pairings in Hollywood. But all the same, her latest show makes for uncomfortable viewing, which is what makes Matthew Broderick's reaction to Divorce all the more surprising. When appearing on The Jess Cagle Interview, Parker revealed that Broderick first watched her show on its October 5 premiere, and he definitely didn't hate it.

While the interviewer tried to broach the potential awkwardness in Parker's partner watching a show that's all about the ways couples tear each other apart, she shrugged this off:

“I guess for both of us, it’s still so separate. It’s work. It doesn’t sit in comparison. I think Matthew is still looking at it like a short story he read. I think he was really surprised at how much he loved it. He just kept saying, ‘It’s just so good. It’s just so good.’ ”

This may not, on first reading, seem like a big deal, but when you think about it, it's huge.

After all, historically, SJP has been the queen of making television that you really, really shouldn't watch with your partner. Sex And The City wasn't just a frothy exercise in showing off the latest Manolos and nightspots of New York, but a scathing indictment of couples. It suggested, to some extent, that, no matter whether you were a Charlotte (on the hunt for heteronormative, "romantic" love) or a Samantha (on the hunt for a casual, sexual coupling), you'd end up unfulfilled most of the time.

The beauty of the show was that it upended the traditional rom-com narrative by constantly asking the viewer "What if?" The most bittersweet what-ifs on the show take place when Charlotte and Samantha both get exactly what they wished for and realize they've been suckered into unhappy endings. For example, the universe grants eternal romantic (and kind of snobby) art dealer Charlotte the likes of Trey MacDougal.

MacDougal is wealthy, handsome, and well-connected. He also seems traditional enough not to be perturbed by Charlotte's resolution to not have sex with him until their wedding. When a tipsy Charlotte decides to seduce him the night before their wedding, and she finds he can't sustain an erection, she decides to repress her concern and go ahead with it.

But just as you were getting all set to break up with that sweet guy and embark on a series of Fear Of Flying-inspired sexscapades, Sex And The City gave you Samantha's unhappy wish fulfillment. Her attitude to dating was neatly summarized when she said "This love stuff is a motherf*cker." She tended to steer clear of emotional entanglements, giving her freedom to enjoy sex. But, when she meets hotel magnate Richard Wright, she gets out of her comfort zone. Richard seems like a male Samantha. He's into sex, kink, and having fun. He's also direct about his lifestyle: "I like to sleep around." Theoretically, Wright should be Samantha's happy ending — but then he starts adding romance into the mix, forcing her to slow dance with him, and, before long, they find they've fallen in love with each other.

But while he's the one to suggest "Let's try this. Just you and me," ultimately Richard is still Richard, and it's not long before Samantha finds him cheating on her.

Similar to Sex And The City, Divorce is uncomfortable about couples. At the beginning of the first episode, we're rooting for Frances: she seems so sweet and together, and her husband Robert seems like a total tool. Clearly, their being on the brink of a break up is all his fault. But — spoiler — as soon as we get a little further into the episode, our biases are undermined. We discover that Frances is a manipulative narcissist who's cheating on him with that cute bespectacled guy from Flight Of The Conchords. Part of the queasy pleasure of watching Divorce is that there's no good guy to root for; both Frances and Robert are equally fallible humans, and it feels like it's their status as a couple that's making them both worse versions of themselves.

I don't know about you guys, but I couldn't watch either Sex And The City or Divorce with the person I'm dating. Both shows make for compelling viewing, but that's in part thanks to the gritty realism (/cynicism?) with which they portray the experience of being in a couple. So, on reflection, it seems pretty surprising for Broderick to not just be able to watch it with equanimity, but to actively love a show that seems to undermine the principle that he and Parker have built their lives together around for the last two decades: matrimony.

So, kudos to Broderick for having the maturity to detach from the personal resonances Divorce might bring up for him and to enjoy it in the abstract, like "a short story." Maybe this is why he and Parker have lasted so long: he's able to applaud her creative work even when it might not line up with their life together. He's a more evolved human than yours truly. If I'm looking for some entertainment to line up while snuggling with that person I'm seeing, I'd opt for Broderick's Ferris Bueller's Day Off long, long, over opting for either of Parker's biggest shows.