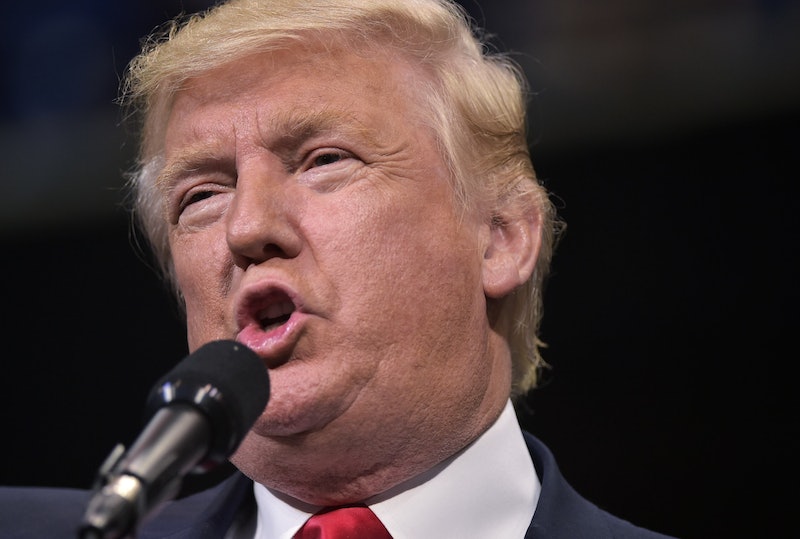 The big day is creeping ever closer. And although anything can happen, the outcome is increasingly looking like a foregone conclusion. The 2016 presidential election is now less than a month away, and Republican nominee Donald Trump's poll numbers seem to have cratered in the face of his abysmal first debate performance, his uneven and caustic second debate performance, and, of course, the galling 2005 recording of himself and Billy Bush. But this might still blow your mind: This map shows how powerful women are in the election, and after you've seen it once, it's plain as day that there are two very different visions of America on the ballot right now.

Credit to the much-loved polling analysis site FiveThirtyEight, which produced the map at a moment when the voting habits of American men versus women couldn't be of more seismic importance. Their projection is based on their current polls-only prediction model, and here's the basic question: If only women could vote in the upcoming presidential election, what would the final outcome look like? If Trump had to be judged solely by the half of humanity that he's shown so much disdain and contempt for, both during his campaign and throughout his adult life, what would that look like? Well, let's just say that it'd look righteous in the extreme:

If Trump's final reckoning were only in women's hands, he'd be on the receiving end of one of the worst defeats in presidential history, a landslide on a scale believed to be impossible in the modern era of heavily polarized politics. The FiveThirtyEight projection has him winning a meager 80 electoral votes under these circumstances, while Clinton would cruise to victory with 458. That'd be the biggest margin of victory since Ronald Reagan defeated Walter Mondale back in 1984 with a staggering 525 electoral votes, losing only the 13 that came from Mondale's home state of Minnesota.

It's also striking because of how different the map would look if only men voted. Obviously, there are some relevant and highly interesting bits of information that get lost here. For instance, white and nonwhite Americans across gender lines tend to vote very differently, so these maps would look a lot different if they reflected racial lines as well.

However, when it's simply broken down into all women vs. all men, the scale of the difference is shocking. While the electoral vote landslide is slightly less overwhelming with only men voting, thanks in large part to the Democratic behemoth of California staying blue regardless, the men-only map sees a swing of 320 electoral votes in Trump's favor (a mere 270 are needed to claim the White House).

In other words, it's women who are standing between the White House and perhaps the worst presidential candidate in modern memory (and, not coincidentally, the most openly misogynist). And there's a real poetic justice to that, especially considering the ease with which Trump has disparaged women through his political and business careers, as attested to by countless reports, soundbites, and his slew of Howard Stern appearances.

Simply put, this candidacy is faltering and in free fall. But even as dramatic as it all seems, it wouldn't be enough to keep him out of the Oval Office if it were strictly up to men to make the call. That's pretty striking, and it should make you think both about how much this country owes its women, and how far its men have to go.