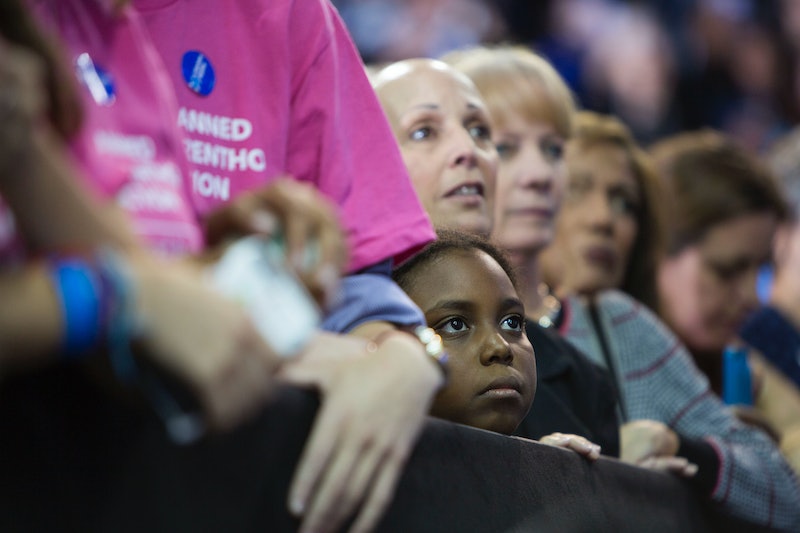 For the last year or so, it's become clear that Donald Trump lives in a slightly different America than the rest of us. In Trump's head, he always opposed the war in Iraq, didn't promote birtherism, and never told us to check out Alicia Machado's (nonexistent) sex tape. And to hear him tell it, Trump definitely doesn't have a problem with women. Of course, as anyone with internet access can find out in a matter of seconds, not one of those statements is true.

Trump's numbers with women are truly dire. In recent polls, Hillary Clinton has led him among female voters by an average of 15 points. Data analysis website FiveThirtyEight reported on Oct. 11 that if only women voted, Clinton would win 85 percent of the Electoral College.

This enormous gap can be explained by a number of things, among them the historic nature of Clinton's candidacy, her history of advocating for women's rights issues, and, of course, the recently leaked 2005 tape in which Trump can be heard making vile comments about women. But perhaps the most underrated explanation for Trump's women problem is the simple fact that he refuses to believe it exists. In other words, one of the major reasons Trump is losing with women is that he genuinely cannot believe that women don't like him.

This attitude is clear from the leaked tapes, in which Trump assures a fawning Billy Bush that he can get away with kissing or groping women without their consent, simply because as a celebrity, they let him "do anything." Implicit in Trump's statements is the belief that all women are, on some level, interested in him. When Trump allegedly gropes someone without consent or reportedly walks in on them changing, he thinks he doesn't need to ask permission, because (he thinks) what woman wouldn't want him? But the data shows otherwise, and it makes it loud and clear that among voters, women really don't want Trump.

The most harrowing, violent consequences of that sort of sexual entitlement are indicated by allegations that Trump has raped women, including a lawsuit filed in June accusing Trump of raping a 13-year-old child (Trump and his lawyers have denied all allegations).

It's no small wonder, then, that Trump is doing so poorly with women. When Bill O'Reilly asked Trump about his polling weaknesses ("You're behind with women"), he simply denied that the problem existed ("I'm not sure I believe that"). Of course, Trump's refusal to acknowledge the problem perpetuates it. "Nobody ... has more respect for women than I do," he told a Nevada news station shortly before the 2005 tape was leaked.

His campaign's outreach to women has been largely limited to a flawed childcare initiative said to be promoted primarily by his daughter, Ivanka, and to a bizarre attempt to discredit Clinton with allegations of sexual misconduct levied against her husband — to say nothing of the fact that Trump himself has also been accused of rape. Unsurprisingly, this has not improved his standing. Trump may believe himself entitled to whatever he wants from women, including their votes, but he may be in for a rude awakening this November.