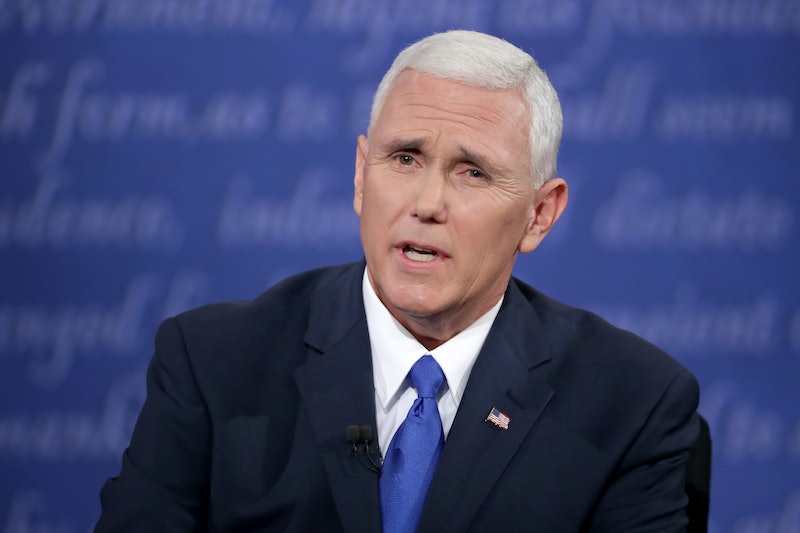 The Republican VP candidate may be hoping to become the nation’s next second-in-command, but Indiana Gov. Mike Pence is the runaway favorite for 2016’s Equivocator-in-Chief. On Tuesday, Pence said that Donald Trump’s assertion at Sunday’s debate that his opponent Hillary Clinton would face jail time if he was elected “was taken out of context.” He then went on to back his running mate’s call for a special prosecutor, so maybe it wasn’t taken out of context?

There are so many superlative performances in the 2016 race — Trump as Party Pyromaniac, gleefully burning the whole thing to the ground, Senate Majority Leader Mitch McConnell as Turtliest Politician, backing into his shell rather than address the #TrumpTapes, and Rudy Giuliani as crazy old man, ready to talk about semen on national television — that it’s tough to see some of the more subtle, yet still high-caliber performances. But Pence is turning out to be one of the greatest two-faced pols of all time, and that shouldn’t go unrecognized.

Among the most shocking moments of Sunday night’s second presidential debate was Republican Donald Trump threatening Democrat Hillary Clinton with jail time should he be elected. “If I win, I am going to instruct my attorney general to get a special prosecutor to look into your situation,” he said.

When Clinton responded, batting away his allegations and saying it’s good that “someone with the temperament of Donald Trump is not in charge of the law in our country,” Trump shot back, “Because you would be in jail.”

In an interview with NBC News on Tuesday, Pence excused the comment as “just a back-and-forth quip,” saying it was in response to a “swipe” from Clinton, but then proceeded to say that “the issue of a Special Prosecutor is a serious one, and I fully support it.”

So… does he support jail time for Clinton, or doesn’t he? You decide! That’s the brilliance of the Pence doublespeak: It means whatever you want it to mean, whether you’re a moderate Republican unsure if you can support someone with as extreme positions as Donald Trump, or a foaming-at-the-mouth far-right Men’s Rights Activist who won’t feel fully avenged (for what?) until Clinton is behind bars.

Pence has been turning in these kinds of performances for weeks. At the VP debate in early October, he skillfully claimed that dozens of horrific statements made by Trump simply weren’t true. And Wednesday, at Liberty University, Pence extolled the Christian virtue of forgiveness, generously extending it to Trump for his comments on sexual assault, even as it failed to reach as far as Clinton for her email woes.

I’m not so naïve as to think that hypocrisy is new in politics, but there’s something teeth-gnashing about the casual, effortless deployment of it by Pence. It may not be as headline-grabbing as the exploits of his would-be boss, but it’s unsettling and noteworthy nevertheless.