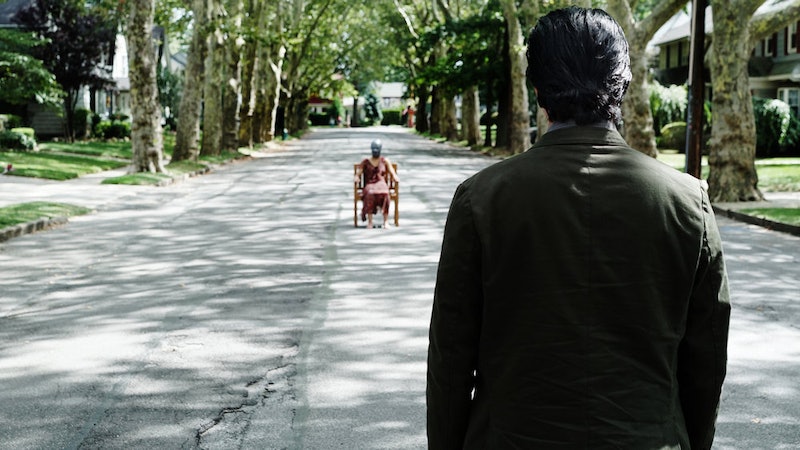 The science behind dreams can explain why you see what you do, what's so terrifying about nightmares, and why you can't seem to stop reliving an old experience while you're sleeping. New USA series Falling Water takes that dream logic one step further by imagining a world where people can share the same, prophetic dreams that contain world-determining information. I know, it sounds crazy, but could the science behind Falling Water actually be real? The premise sounds like total science fiction, but you never know — the fate of the world could fall into the hands of three strangers. Well, as it turns out, the series is taking its liberties with dream science, but said science does exist.

In order to explain more of what inspired the show, USA conducted a dream study, which found that younger generations are changing the face and science of sleeping and dreaming. According to the study, "This is because their natural attributes — multiculturalism, tech forwardness, and creativity — align with the characteristics of “good” dreamers. Millennials have better dream recall and dream more vivid dreams than their Gen X counterparts." And, since people are now using cellphones and laptops late into the night, the study found it had an effect on dreaming. "Given the evidence that shows how the 24/7 influx of information via multiple screens has re-wired millennials’ brains, it’s not surprising that these changes have also impacted their dreams," the study noted.

These changes still haven't reached the level where people could conceivably share the same dream yet, but the study pointed out that augmented and virtual reality video games like Pokemon Go are bridging the gap between personal and shared experience. And, the dream study found that there's more lucid dreaming among millennials. According to the blog World of Lucid Dreaming, even in the lucid dreaming community there aren't any reports of multiple people sharing the same dream. However, it may be possible to share certain elements of another person's dream if you both experience the same stimuli before going to sleep (World of Lucid Dreaming uses watching the same TV show as an example).

When it comes to the science behind the significance of dreams, there's a long history of analyzing the imagery and piecing together the logic of what happens in our dreams. Most modern dream analysis dates back to the studies of Sigmund Freud, collected in his book The Interpretation of Dreams from the late 1800s. He popularized the idea that things in a dream could stand for issues and concerns in your life. The most extreme outcropping of this idea is the premise that a dream symbol could hold the fate of the world in its balance. As with the lucid dreams, there's no evidence that anyone's prophetic visions actually saved the world, but perhaps Falling Water will make a compelling argument about how important dreams can be. You can tune into the premiere Oct. 13 at 10 p.m. ET on USA to find out.