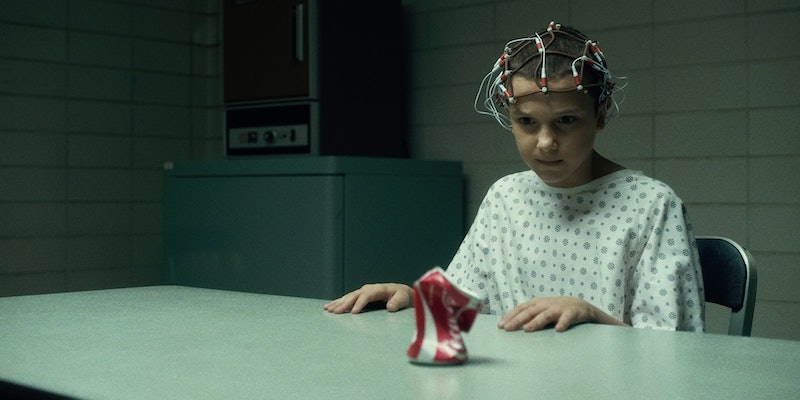 Still feeling totally hyped after Season 1 of Stranger Things? Already craving any and all details about the second season like Eleven craves a fresh box of Eggos? Well, luckily, some fascinating tidbits about Season 2 surfaced on Wednesday straight from the mouths of Stranger Things creators The Duffer Brothers, and they concern some interesting fan theories that you will love. You might remember that Stranger Things Season 2 teaser that was recently released — the one with a complete list of mysterious episode titles on it. If you're one of the many who has taken to Reddit recently to formulate theories on these episodes, then there's a chance you could be right about them. In an interview with The Hollywood Reporter, The Duffer Brothers (aka Matt and Ross Duffer) suggested that some Stranger Things theories are "very close" to being correct.

In speaking about those mysterious episode titles (such as "The Pumpkin Patch" and "The Secret Cabin"), Matt stated that though some "will likely change," that he's actually been sent some theories regarding them which cutting it very close to what they have planned for Season 2:

"Some of the fan theories online are amazing. Most are wrong, but I’ve read a few that are right or very close. Is it Reddit? Some of those people have figured stuff out based off of the chapter titles"

Whoa. So, basically, if you've been roaming around the Upside Down of Reddit recently with your wild-eyed, Stranger Things theories, then there's a small chance that you could be on the right track. Being a theory enthusiast myself, I couldn't help but wonder what possible Stranger Things Season 2 theories The Duffer Brothers could be talking about. So, here are a few of the hottest ones online, right now (and obviously, it goes without saying, that you should almost certainly stop reading now if you want to completely avoid any further speculation or potential spoilers):

1. Some Of The Episode Titles Could Be Referencing Dungeon & Dragons

Considering how crucial the role-playing game was in Season 1 of Stranger Things (as an actual plot device as well as serving as something of a meta-allegory for the plot), it seems possible that some of the Season 2 episode titles are also referencing D&D. As Reddit user MyHeartIsASynth suggested on the Stranger Things subreddit: "The Palace" might have something to do with the Proud Princess. "The Pumpkin Patch" and "Pollywog" could be the flowers in the cave. "Madmax," for some reason, makes me think of the Lost Knight (who I believe to be El)."

How these roles could play out within Season 2 of the show would remain to be seen, but it seems perfectly plausible that the gang could be playing another game of D&D in Season 2, which helps to guide them to wherever they need to be.

2. Episode 1's "Madmax" Could Refer To A Certain Cop Traveling Through An Apocalyptic Wasteland

On the same Stranger Things subreddit thread, user tyrannaceratops made the briefest and most perfect connection between Police Chief Jim Hopper and Max Rockatansky from the Mad Max films, saying: "Mad Max: A former cop who travels through an apocalyptic wasteland. Hmmm... Sounds like someone we know."

The connection between the two characters could also be more than simply their ability to wander through destructive terrain. As Slash Film suggests in it's episode title analysis, in the Mad Max films, our eponymous hero goes out for revenge after his wife and daughter are killed, and in Stranger Things, Hopper not only loses his daughter, but also his surrogate daughter, Eleven. So the episode could show Hopper fighting back against the insidious government forces of Season 1.

"Madmax" being a singular word could point to it being a government code name for a secret project or a possible password, or the title could even allude to Max — a new skateboard riding, female character. So who knows.

3. "The Pumpkin Patch" Of Episode Three Could Refer To The Field Of Eggs Hooper Found

As pointed out by Screen Rant, "The Pumpkin Patch" is likely not going to be referencing something literal but alluding to something that simply resembles a pumpkin patch instead. And the field of eggs that Hopper comes across in the Season 1 finale of Stranger Things is certainly that. Pumpkins are also the organic mascot of Halloween — the most horrifying of all the holidays. And discovering an entire new field of eggs with something unknown and sinister growing within it would be pretty horrifying, to say the least.

4. "The Storm" Of Episode 5 Could Be Electrical & Could Rupture A Hole To The Upside Down

As we discovered through several of Joyce's busted telephones and her spooky experiments with fairy lights, there's a definite connection between electricity and the Upside Down. In fact, there's a suggestions that electricity seems to trigger some manner of boundary crossing property between the two plains of here and there. As such, The Independent suggested that "The Storm" could well be referencing some kind of an enormous electrical storm which could tear open a gateway between the real World and the Upside Down. Which is mega uh-ohs for everyone, right?

5. "The Pollywog" Of Episode 6 May Be The Slug-Type Creature Will Coughed Up

Since a Pollywog is commonly used to describe a tadpole, general consensus online seems to be that "The Pollywog" will have something to do with the slug-like creature that Will coughed up at the end of Season 1. Another theory, however, as raised again by The Independent (in the same article as above) suggests that the episode title could be referring to someone who has yet to cross the boundary into, or out of, the Upside Down. Why? Because a second meaning for a Pollywog is a sailor who has not crossed the Equator. Interesting.

6. The Upside Down Is In Eleven's Mind

Though this theory doesn't relate to any of the episode titles teased, it's still worth mentioning. While many people (including myself) have been pushing the theory that Eleven is the Monster, there's also the secondary theory to go along with that idea: The Upside Down is also part of her mind (as suggested by @Seaceall on Twitter). I mean, think about it — not only did she have a creepily accurate knowledge of how Will and (poor) Barb were doing in the Upside Down, she also seemed to be incredibly familiar with the terrain. And boy, would that be one chilling twist.

Oof, well there we have it. My mind is officially blown even bigger than a burnt out mouthpiece on one of Joyce's phones. Whether or not any of these theories happen to be the ones that The Duffer Brothers have alluded to being close to correct is probably best not thinking about. Seriously, all of that speculating will just turn your brain upside down. So I suggest that we all just chill out and be patient (yeah right) while we wait for the second season of Stranger Things to finally premiere on Netflix. Whatever happens, something tells me it'll be worth the wait.