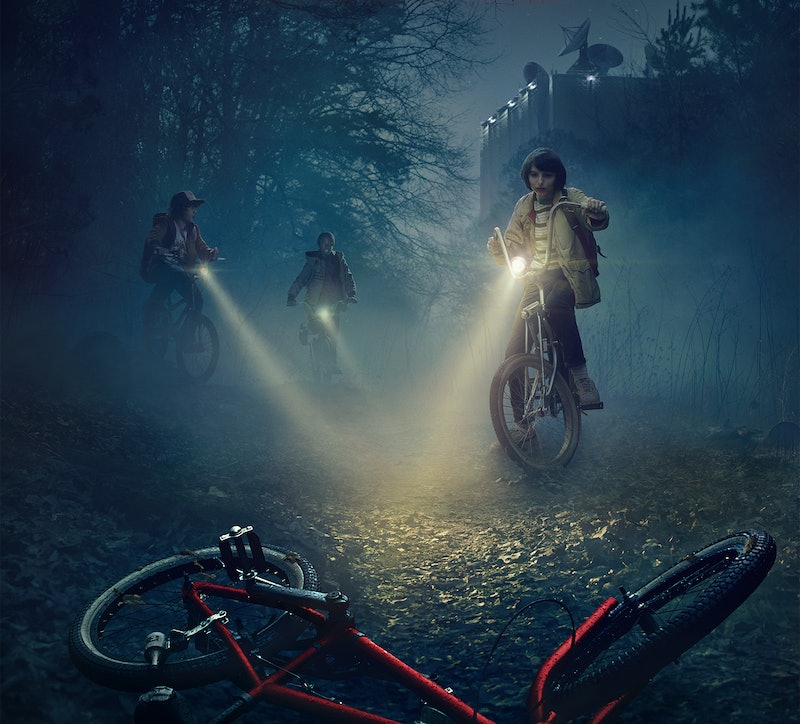 This summer, fans of '80s nostalgia, science fiction, and adorable kids going on perilous adventures got their latest obsession in the form of the Duffer brothers' Stranger Things. But, I won't lie, I've been a little stressed out since the streaming service hadn't granted the show a second season despite its overwhelming popularity. Well, the time has come my fellow Eleven fans and Barb diehards, Netflix has officially renewed Stranger Things for Season 2! Now, let's break down what those words mean in the Stranger Things Season 2 announcement video.

The prevailing theory seems to be that they're the episode titles of Season 2 since we do know there will be nine episodes, and there are nine phrases shown in the video. If Stranger Things Season 1 taught me anything, it's that the Duffers don't do anything by accident, so my gut tells me these are in fact the episode titles. Plus, if you look back at the titles of Season 1 - "The Body," "The Flea and the Acrobat," and "The Upside Down" for instance — these new phrases follow in the same trend of being specific without giving much away. But, until Netflix or the Duffer brothers confirm as much, we don't know for sure if these are the episode titles.

So, let's dig deep and discuss what these potential titles mean for Season 2 of Stranger Things.

This particular word seems like a clear reference to George Miller's 1979 dystopian action film that launched a series — followed by Mad Max 2 in 1981 and the more recent, Mad Max: Fury Road, in 2015. Since Stranger Things Season 2 will take place in 1984, only the first two films will have been released, but it's possible the title is a nod to Eleven's Furiosa look.

That said, the title could also be referring to the wild tone of Miller's Mad Max films since it would make sense for the season premiere (that's assuming these episode titles are in order) to include some kind of inciting event that kicks off the action. Plus, in terms of wishful thinking, maybe "Madmax" also means we'll get to see Mike, Will, Lucas, and Dustin in some kind of Mad Max-inspired bicycle incident.

2. The Boy Who Came Back To Life

The Season 1 finale of Stranger Things showed fans that Will was changed by his time in the Upside Down — he puked up a slug! My guess is that this episode will focus on Will and dive deeper into exactly how the dark dimension impacted him, both physically and mentally. Plus, if you looked closely in the Season 1 finale, there was a shot during the epilogue in the police station featuring a bulletin board full of newspaper clippings and one headline read "The Boy Who Came Back to Life" with a picture of Will. So I think it's safe to say fans will spend more time with Will in this episode.

This one is a little less straightforward, but since the announcement video reveals Season 2 will take place "in the fall of 1984," it's possible this episode could be centered around Halloween. Season 1 ended around Christmas, following a one month time jump after the initial week-long adventure. So, if "The Pumpkin Patch" does have something to do with Halloween, that means less than a year will pass before Season 2 begins.

Another episode title more ambiguous than straightforward, "The Palace" could refer to any number of things. However, since a palace is most often occupied by a member of royalty, it likely refers to someone of importance on Stranger Things — perhaps Dr. Brenner, who we know is alive following his encounter with the Demogorgon in Season 1. Or, perhaps "The Palace" refers to something within the Upside Down, a refuge of sorts among the dark and evil entities that inhabit the dimension.

It's possible, in the case of "The Storm," that Stranger Things Season 2 will feature a bottle episode — and episode set in a single location — set in the midst of a storm in Hawkins, Indiana. Or, the episode could simply include a storm that impacts the story in some way, perhaps causing a power outage in the lab in which Eleven was raised and allowing the Upside Down to further creep into the characters' home dimension. However, it's also possible the storm is more figurative than literal, ominously foretelling destruction or change of some kind.

Now, this episode title is interesting. See, pollywog is a slang term for a sailor who hasn't crossed the Equator. However, a polliwog — specifically with an "i" rather than a "y" — is another term for a tadpole, the offspring of an amphibian. Those slugs from the Upside Down certainly looked amphibian-like, so perhaps "The Pollywog" is referring to a new creature the residents of Hawkins will face in Season 2. After the seeming destruction of the Demogorgon in Season 1, Hawkins is certainly looking a little monster-free going into Season 2.

This far into Season 2, it's most likely "The Secret Cabin" is referring to something we haven't seen in Season 1. As for what it could possibly be referring to, I have a hunch it's exactly what it sounds like: Stranger Things will feature a secret cabin. My money is on Chief Hopper having the cabin — he just seems like the type to have a secret hunting cabin somewhere, don't ask me why.

The Duffers really love their ambiguous episode titles, don't they? For "The Brain" I'm thinking it may refer to an episode that dives into Eleven's powers — where they come from, how they work, etc. — from a scientific level looking at her brain. If it's less of a specific meaning, "The Brain" could also be a reference to the head of the Hawkins Laboratory where Dr. Brenner works. Dr. Brenner has to answer to someone, right? So, perhaps this episode of Stranger Things will introducer/expand upon the brains of the operation.

OK, this Stranger Things episode title in particular has me rolling up my sleeves and diving head first into conspiracy theory. As of the end of Season 1, the only brothers we know about are Will and Jonathan, and Nancy's younger brother Mike. So, perhaps Mike gets lost. Or, "The Lost Brother" refers to Jonathan figuratively losing Will to the Upside Down — depending on whether the dimension's impact on Will can be reversed or it will change him irrevocably.

However, there's one mystery on Stranger Things that may or may not involve brothers: The other children in the Hawkins Lab experiment of which Eleven was a part. Where are numbers One through Ten? If they were lost, or escaped as Eleven did, could they return? How cool would it be to see Eleven have a brother? Whoever the lost brother may be, I'm sure the episode will make for a great finale.

So, those are my theories about the Season 2 episode titles, but I'm sure there are even more out there, and I can't wait to spend the next year speculating about what will unfold when fans get to return to Hawkins. No matter what these words mean, we all know things are going to get even stranger in Stranger Things Season 2.